Southern Kennel’s had flown in SCK’s Blondie from Ecuador to Florida to breed to Super Kennel’s Ch.357. However, the bitch did not take. At that time. Evolution Kennel’s had a Gr.Ch.Mayday-SCK’s Blondie female named Macha that was in heat. So, Evolution Kennel’s called Southern and asked if he could use the stud fee and send SK the pick of the litter female. Southern Kennel’s thought about the expense of another roundtrip airfare and the taxes to bring the dog back to Ecuador and said..O.K. Well, the breeding was done and Machobuck was born. We had called B.B. and said we wanted to do a 53. Well, he found us one. We traveled to SA and when we got there. AMW said they were going to kill us. We asked DOWNTOWN to take a look at our opponent Jimmy. He came back and we said..”Well, How does he look?” DOWNTOWN said ,”He looks like a million dollars!” When we took Machobuck out of the truck.. he squatted like a pup to urinate. B asked us how old he was. We said 15 months. B said,”.pay the forfeit and take that bad puppy back home.” We said NOPE, We come to play. B said,”Well, SPANK THEIR ASS!” That’s just what Machobuck did. Jimmy had his way for 5 minutes, then Machobuck hit his spot 17 minutes later, Jimmy didn’t make his first. Winner :Machobuck (1X)

For #2 TGK had hooked their 48.5 pounder into PPK’s Blue. Blue had been to the hour mark twice and had a good reputation. TGK couldn’t beat a stomach virus and asked if he could use Machobuck. We said yes, but DOWNTOWN had to shape him again. 6 weeks later Machobuck hits his spot right in the middle and never lets go. Blue couldn’t make the first at 22 min. Winner:Machobuck (2X.)

For #3 E O hooked us into old man indian chief in SC. He had a little (1X) winner named Coyote that had beat the Untouchables in 1:55. We drove 22 hours to N.C. and the old man took us in. We were eating dinner and F said,”Son, You’re gonna find out if you got a game one cause I am bringing a BULLDOG.” We said “With all due respect, we aint coming to run no marathon, we are coming to kill you in 30 min!” F Laughed and said, “Son, If you kill me in 30 min… I will go home and shoot ALL my dogs.” Well, It’s even for about 5 minutes then Machobuck hits his spot and never lets go. At 28minutes Coyote is finished and can’t go. We asked F about his dogs at home and he just laughed. He said ,”Son, I’m gonna have to re-nig on my word.” “You guys have an UNBEATABLE dog.” He can win in anyones hands. I haven’t seen a dog with that much finish since Chavis Ch.Jocko. Winner:Ch.Machobuck

For #4 We had hooked Ch.Machobuck into Ch. Edge 14 weeks out .We also hooked our Redboy-jocko X Rascal dog Dingo into a (2X) winner named Blacky from Deathrow &T-Nice Kennels. The Blacky dog was reputed to be an UNBEATABLE ACE and we wanted to see if our Dingo dog could beat him. Two weeks into the deal. Dingo pulls a shoulder on the Catmill. DOWNTOWN said Lets use Ch.Machobuck ! We thought , That’s cutting it really close with Ch.Edge. We said LET’s DO IT. Machobuck is a BULLDOG. When we showed up to N.C. with Ch.Machobuck they thought we were NUTS. All the betting was on Blacky cause they said we would be too overworked. the old indian chief and Live&work Kennels took all the bets. When we released, M.G. (the ref) said “This aint gonna be no 30 minute deal, I’ve seen this dog and he’s the truth.” It was even for about 10 minutes then Ch.Machobuck hit his spot and stayed there. Well, the ref M.G. was right, Blacky was a better dog but only 3 minutes better. It was over in 31 minutes. Winner: Ch.Machobuck(4X). 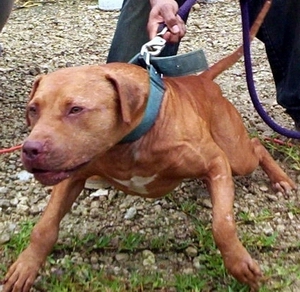 For #5 Machobuck was hooked only 7 5 weeks away from #4 and we were seriously contemplating paying the forfeit. A week after though.. Ch.Machobuck was going NUTS on the chain. He would go crazy when DOWNTOWN would work Ch.Hannah So we all sat down and decided.. LETS GO FOR IT! When we were at a show in South Texas, they told us we were CRAZY and that we were taking Ch.Edge too lightly. We were informed that Ch.Edge had beat Stookes Ch.Goofy, the Wallboys, and E.Harpr. It did make us a little nervous but we still decided to do it. Macho had a wound on his foot that wouldn’t heal and our friend Andre told us to pour bleach on it a few days in a row and it would dry up. We did it and about a week b4 the show it had all but closed up. EVERYONE in Texas bet against us.. even our friends at TGK. To NFK and Ch.Edge.. all the credit in the world. They brought a BULLDOG. Ch.Machobuck hit his spot from the go. He stayed in there about a minute then It was even for about 5 minutes. Then Machobuck hit his spot again, but unlike the other shows, Ch.Edge would only let him stay there for a few seconds and peel him out by the face working over our muzzle. Ch.Machobuck did do a lot of damage when he was there. At about the 30 minute mark Ch.Machobuck stayed in there real good for 10 minutes and we thought it was over. Ch.Edge all of a sudden caught a second wind and hit Ch.Machobuck’s backend pretty good and NFK started screaming and hollering that that was it. They said Ch.Edge had finished all in the backend and Ch.Machobuck was next. All of a sudden Ch.Machobuck grabbed Edges backend and it was toe to toe backend to backend. After about 2 minutes of that Edge released and got him out but Ch.Machobuck hit his spot again and this time… he wasn’t letting go. He finished Ch.Edge at the 50 minute mark but it took us 40 minutes to get a handle. Winner: Evolution Kennels Gr.Ch.Machobuck.
http://www.apbt.online-pedigrees.com/modules.php?name=Public&file=printPedigree&dog_id=63814