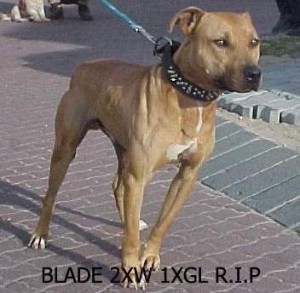 I have decided to write about a dog not many, well probably only a privileged few has met and known for the time he was with us. Some little back round info; the late D.Carrol and Southener put the breeding together using Junior (GR CH BUSTER BROWN /Le Fonze’s Buddah) to Blackbird (Shack Nicky), what came out of it was a very good litter.

In no particular order:

Blade was contracted for his first time out and for his owners as well into Cape Fear who owned a dog off Colin’s Big John & Pazi named Bobby.

It didn’t take long for Cape Fear kennel’s to realize that there hard mouthed Bobby was being whipped and had his face re-arranged as Blade chewed it off after his foot almost severed from the leg (you could put a golf ball in the gap at the ankle) He won just under 50mins(could have been 47min).

He came to us a very, or should I put it this way, in a GRAVE state as his owners fell prey to circumstance’s out of their (owner’s) control and, at the time 1xw Blade was an unfortunate victim of this terrible circumstance… but fate intervened and Idlewild saw to him, feeding him small meals…why? Well, he weighed about just 13kg’s(if not less) and almost every bone that could possibly jut out did just that.

At the same time Pepper (Junior Diamond) was in keep to go at 16.5kg and he got off the chain killing a very very good prospect, a grandson off CHI CHI as well as to CH Thunder… in any event, so Pepper was unable to hunt…I came up with the crazy idea of taking Blade 1xw in place of Pepper… and Blade then only weighed 14.3kg or so. Needless to say with hard work and patience of a saint (as Blade worked against you, you go left he goes right) I got him into shape along with the aid of Idlewild’s son…irony his nickname too is Junior . As Blade’s first hunt was at 17.5kg and this time we hunted at 16.5kg, a little lean for Blade but I felt confident enough he would win… the result was a snake like monster in the box for number 2… Printer still ref this one and well, we won at 1h51min as Block’s Castor 1xw (who I previously lost game to) stop dead centre and didn’t move taking the count. In one of the handle’s made I couldn’t remove the tooth (right cutter) from his mouth as the Printer refused to do it(as Blade was screaming murder trying to break free to get back into action) and the opposition agreed with the ref for my second to help hold him and pull the tooth. Mind you, after we did that his bite was weaker, and we all noticed it, as when he was fanged/loose cutter he bit harder… but in the end he won, screaming his courtesy bang! into Castor who curred. Well, Blade was such in great shape even after the hunt he went a day later back onto the yard where I kept him and nursed him back to his weight and a more actually as it was required for to be hog fat to fly. He too accompanied Pepper to Canada.

Even in mid air and bit thru his sky crate and fortunately he still landed without incident.

Well, Blade made the necessary deeds to be considered to take on an AMERICAN PITBULL Terrier.

Gomez(Lewis/heizel/Corvino) dogs .But Muddy didn’t take with Blade . He then tried again to the full sister of CH William’s Tinman ACE but she (William’s Rocket) was already 11yrs, with a fused vertebra and again didn’t take. The few that knew how Blade was bred (Junior/Mexican Black Bird) said not to hunt with him, but I felt confident enough for my bud to go ahead with Blade’s championship deal. He was later hooked into Gas City’s Shaker 1xw(Hubcap/Greenwood) from Texas if I recall correctly and they met in the Great North region. The hunt was even at 50min until Shaker changed the pace and needed to adapt, No Doubt was the second and  both my Bud and him decided to pick a very game effort by Blade at 1hr16min… again he screamed his way into Shaker’s corner. Blade passed after 18hrs, from a brain hemridge from a blood clot that moved all the way. He died in very capable hands, all whom was present (believe me I would love to name the dogga’s, but need there permission) said only good things as to the ref. Big T( c/h of GR CH SNAPS) .

Blade was a good one, and as the saying goes: “ a good one is where you find him” , in addition to this I wish to say; “ Both at home and in Canada” Rest in Peace friend…stubborn bastard that you were.