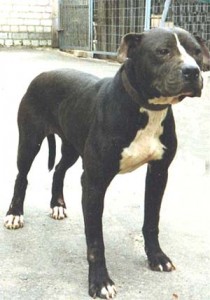 BAD ROSEMARY was born in the kennel STP in 1993. Her father, CH BLACK PAZMANIAN, classy fighter, and as it turned out, a great producer. He is the father of 4 Champions. Her mother, CH GINA GIRL – daughter of GR CH BUCK ROM. Littermates are BAD ROSEMARY CH LUTHER, STP’s CLEAN MARRY – the main producer of the nursery STP, Capitan America’s GIGI, PEBBLES, and others. The first role BAD ROSEMARY took place in 16 months from the role of CH BB was stopped in 4th minute, as the BB was severely injured. To be fair to say that BB was easier. After this role, it became clear that Trump BAD ROSEMARY – breaking bite. A month later, she underwent another role with promising young dog. It all ended in the 8th minute. Rival died right in the ring.

The third rival BAD ROSEMARY roll was a one-time winner. At a picnic with Fat Bill, I talked to the owner of the bitch. He told me that BAD ROSEMARY broke and pulled his bitch side, and was seen as the heart beats. I could not believe it, but STP confirmed this fact. Once these roll have decided to set the STP BAD ROSEMARY in a match. Opponent was very tough bitch bloods CH TERMITE (RED BOY / JOCKO). Up to 10-minute struggle went on an equal footing, then BAD ROSEMARY has often attacked in the throat and chest, and the 21st minute it was over – a rival died. After all that I learned about the BAD ROSEMARY, I immediately wanted to buy the bitch. At that time she had a 6-week puppies from Camp’s CH LUTHER’a. We agreed on a price and I took BAD ROSEMARY. STP was told they did not know game or not, but it given from parents, and her littermates also demonstrated the game. And again, perhaps the most silnokusayuschayasya dog they have ever seen. Much later, when BAD ROSEMARY, was already in Russia, I spoke with Capitan America and I was pleased to hear that even though they are with STP and eternal rivals, but objectively, the bitch is better than BAD ROSEMARY, he has not seen. I also received a letter from the editor PIT BULL CHRONICLE  in which he wrote that he had seen in a BAD ROSEMARY Roll and match, and that this level of dog he had never met. Not surprisingly, I wanted to hurry to see it in action. But just did not happen. For technical reasons, postponed my flight from the U.S., and BAD ROSEMARY had to sleep in veterinary hospitals in New York. She arrived in a very strong stress. So, whether in the hospital she caught the infection, whether it is the consequences of the flight. She was sick for a long time and did not even want to walk.

I’ve put up with the idea that I can hardly put it, the main thing – to cure. A year later, she felt a little better, and I decided to expose the cross. She did not want to do … and the rest of his days, she did not come out of stress. Mast was held in Dnepropetrovsk against dog named Ksenia. I really liked this bitch, she is a good move, and seemed to control the situation. But BAD ROSEMARY was enough to make some powerful attacks, and Ksenia shot on the 13th minute. BAD ROSEMARY greatly injured her. I do not think many people have seen such an injury. BAD ROSEMARY won this match, being pregnant. Here’s how it happened. The first time I tied her with TUCSON’om, this bundle of STP and asked to send them a puppy, but she propustovala. Bo-time preparation for the match, she again began to flow. Since the first mating was unsuccessful, then my wife and I decided to breed her, and in case of pregnancy, to abandon the match. A few days before the match we did a test, and repeated it two times, and the test showed negative results. Absolutely confident that it propustovala again, we went to Kiev. And after 6 weeks after the match BAD ROSEMARY bore seven pups from her litter CH LUTHER’a. Unfortunately, or disease, or load in affected match that had survived only one puppy. Some time passed and I decided to put BAD ROSEMARY third match. Competitor in this weight it was hard to find, and I agreed to put it up against the male of the Cherkassy named MAIK. He was the winner in 2 matches and the contract was said to be in the 7 games “with the chain.” Mike did not luck. BAD ROSEMARY immediately able to inflict severe injury to the throat. But since the skin is not broken, it did not cause concern among opponents. MIKE lay down on the 26th minute. In the 28th minute, his shot, even a few minutes later he died. MIKE – was “dead game”, as until the end of the holding grip.
So BAD ROSEMARY become champion. 4th match was against the bitch named BESSIN from Kharkov. This bitch bite very hard, but BAD ROSEMARY bite even harder, and Bess shot at the 11th minute with a serious chest injury. After the match I tied BAD ROSEMARY with his best TIGER’om manufacturer. And again, she had problems with his health. To save the life of the puppies, I had to pick them up immediately after their birth. I was lucky at that moment I was in the nursery sorted bitch who nursed all 8 puppies. BAD ROSEMARY took a full course of treatment. I wanted to put it on the 5th match, and I began to search for an opponent, but it was difficult. And again I had to agree to the match with a dog. Owner of a dog was Slobodan Knezevic. In this game the first time I encountered a “dirty game” and was not ready for it. Who was present at this game, or seen the video, know what I mean. Actually, we won this match on the 30th minute, when Slobodan pushed his dog scratching at the knees. I have not seen this since corrected the injured paw of his dog. The judge stopped the match, and the OSCAR nominated “penalty” scratch. Under the contract, which itself was the referee, and D. Kuznetsov, a push – it’s a loss. There is no “penalty” Scratch the contract was not provided. But if we evaluate the match, the Oscar was physically stronger.I removed the BAD ROSEMARY at around 1:24, because she was very proud. She performed several game scratch, and I am sure that few have seen more gamer bitch than she is. BAD ROSEMARY did not feel too bad after the game, but from the third day, she was getting worse and worse. She died on the 21st day from kidney failure. BAD ROSEMARY was not very talented and could make a “turn” or “sing songs”, but she had Game and a very strong bite. Unfortunately, stress, or perhaps the lack of my experience was not allowed to reveal her fully with us in Russia.
http://www.apbt.online-pedigrees.com/modules.php?name=Public&file=printPedigree&dog_id=108004