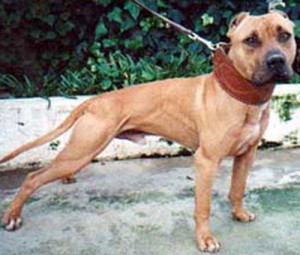 Here is a story about a great dog, named Blockhead that came from Mr.Victor Aycart yard as a puppy. he is double breed by Mayday. He has grown inside the house and we decide to call him just Boris. His first match was against a dog everyone was talking about in my country and was considered the best, his name Nelson (Lord): A recognized referee was invited , Mr Tex-Mex. Nelson picks up is game dog at 18 minutes. next it was in Spain, we traveled 1600km for this one against Fernando Mambo a 2xw, also considered the best dog in my brother country, referee Cortijo Kennels. Mambo dominating the show for the first 10, 15 minutes with a single throat hold, at 25 minutes was all over, Boris had killed Mambo.

After that, had passed a couple of years with nothing happen, i really think that was all over for Boris, because nobody wanted nothing from him, and he was getting old. when suddenly Corocotas kennels contact me and here we were on the road again. i don’t recall the dog name, only that was a very big one, Boris weight was 25, 5 and the other dog 37 kg grandson of Ch. Porfirio, referee Raúl. this was in 2003 , at 38 minutes was all over, Boris became champion!!!!!! well Corocota is a true dogman, and he wanted another just 2 months later.

so 2 months later there we were again, this time against a 1 w named Wilson. referee Evaristo, this was the hardest one Boris ever had, but it was all over in 37 minutes, Wilson sracthing when everyone thinking that was almost impossible….., great dog!!! Ch.Blockhead now a 4xw.

We went to Holland to go for the Gr.Ch. title but Junkyard, lose interest ……

But still Ch Blockhead 4xw was considered the best dog in Europe in 2004, by the european game dog magazine.