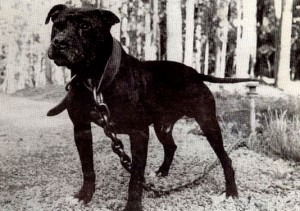 Recently while in a conversation whit the editor and long time friend,Fat Bill we got on the subject of gr ch Pedro which is recognized as a Register of Merit in the sporting  dog journal.We decide it was time to set the record straight and clean up anything and everything that revolved around the old Pedro dog.As Bill says “from the womb to the tomb” so here it is . I understand that a few years ago a couple of know it alls got together and told the story of Pedro in some extinct magazine,by the way it was a rag that I did not subscribe to!The problem with this is that they in reality had nothing or very little at most to do with Pedro. I found it quite humorous that these people belittled this  efforts,condemned himas a pit dog and stud.Soon as his fame started to surface these same leaches had to jump on the bandwagon an tell the gossip accvordingto them,steal the thunder  so to speak.This same bunch ended up in the cur pile as Pedro has long since made fools of theme.Pedro has gone down in the history as a great pit dog and one of the few great stud dogs.

And for the characters that wrote their slime,they all have just gone down!One left the country,the other let their bad habits destroy them and the rest of them had so little impact on the game that I can’t recall what happened to them.I will give credit where credit is due and only to those that deserve it,as far as Pedro was concerned. Grand Champion Pedro was bred by James Crenshaw whom owned Champion Champion Rascal at the time he was bred to Mr Dow’s Sandy. Ofcourse we are all familiar with the producing

capabilities of Crenshaw Champion Rascal,Crensaw’s Sandy was a very good producer and appears in the pedigrees of many good one s,Holcomb’s Zeus ,Meade’s Gr CH Crazy Turfman are a couple  that come to mind . Pedro was game tested at an early age for about 45 minutes .He showed signs that He was most likely to be a dead game dog ,but he did not show the bite and flash that Crenshaw said he was looking for.Then went on the Emmet A.and he is the gentleman that I bought him fromfor the meager sum of 600.00.I had callled James Crenshaw to verify it was the dog that I wanted,he assured me it was .Pedro went under the name of Wee Willie at the time .Bob Cox had offered him at stud in the Sporting dog Journalso I call and inquired about the dog I soon found out that his owner was Emmet A .At any rate Wee Willie had won several matches and also won under the name of Lil Joe .I was told that James Crenshaw tried  to buy the little dog back for 1000.00 after I told him where he was and the price I was going to pay for him. Luckily Emmet A is a honest dogman and held up to our deal and did not give  into the higher offer.After we receiving Pedro I was told he may have heart worms,after a trip to the veterinarian he was diagnosed as negative and then it was to the pit for a look see at  my newly acquired dog.I saw plenty of raw talent ,but schooling ,proper feeding and conditioning were in all order.The truth is he was in pretty bad shap when I first got him, but I soon correccted this and he responded very well.

Pedro’s first match of record toward his Gran Championship was into the Alabama Boys at 35 lbs the time only 37 minutes .Pedro showed me that he could bite and he had learned his lessons well as he totaled their dog. Number tow , was Texa’s cupid at 35 1/2 lbs.and was one of Pedro’s toughest contest.It went tow hours and forty-seven minutes and both dogs actually scratched until Cupid expired as he attempted to scratch. Pedro show me this time that a dog would have to kill him to stop him.So the decision was made to go for coveted championship. his third match came only tow months later ,some thought I was crazy after coming off such a hard battle.But had healed well,not tacking away from his next opponent, who I had seen

go before, I knew Pedro could whip him;they made the challenge ,so on we went !Tarheel’s Buck a carolina bred dog was no threat as Pedro put him away in forty seven minutes.For all practical purposes it was over by ten minutes After this match I was so proud that Pedro had won his Championship.My long time friend Artie Nance came over to me and tried to rain on my parade.He said “Snakeman,I would not be happy with that Pedro dog ,I think he is a piece of shit and I believe that my Ben dog would beat him in twenty minutes!”I was so pissed off I found myself making a contract for  the next month.Champion Pedro was being called to do the imposible ,as I hasmore dogs a that time than I did brains,but I know that Pedro would take it to the limit. About six weeks laterArtie Nanceshowedup withhis prizedBen,he wasa tow time winner that had blown away his competitive weight of 35 lbs.To start off the first 10 minutes looked as if Ben would whip perdro for sure ,but after that it was all down hill.Champion Pedro took a skin hold on the lip and just laid there and hung on until about the thirty minutes mark.Pedro comes to the top and kicks ass ,after the fifty minute mark Ben is trying to find an exit ,but Champion Pedro blocks the door.Ben starts to holler and Nance pick up at  52 minutes.This fight was better for the check book than all the other combined. I had come to the decision of retiring Champion Pedro after this contest ,as I finally realized what I had.One of those dogs that only come around once.I would only showed him again if the purse was right and preferably a champion. I collected forfeits with Pedro from Super Gnat (ch chino) ,Turlington’s (Dipstick), R.Sorrells, and W.Spencer as none of them wanted any part of a dog they would have to kill to beat. So I had Champion Pedro retired until Artie Nance came to me wanting a chance to get his money back,I decided that the stakes were worth it .It was one year to the month that we went into Artie Nance ‘Sarge

dog,a six year old dog that had won eight matches,bred from Ed Crenshaw.Iwas told later that Mr Nance had bought this dog sdpecificaly to beat Pedro and to win his money back.In the same

stroke he was wanting toshut the ole Snakeman up about this dog.They almost did it,but I had Champion Pedro in the best shap of his life .Sarge was a real smooth fighter he paced himself and was effective

with his mouth.The first hour was a wrestling match the second hour was a war.Around one hour and fifty- five minute mark Pedro got his second wind and blew Sarge away by burying himself in his opponents chest

.This win was a great one and made Champion Pedro a bona Grand Champion .All together Grand Champion Pedro won 9 contract contests and 11 over all.He was a great pit dog in all respects and truly a living dead  game dog.His breeding career since has outshined any of his show endeavors.He has produced many ch and many dogs that have produced top pit dogs for generations on down the line.Grand Champion Pedro R.O.M. produced CH Rush,ch Mert,ch Perdro Jr,ch beak,gr ch Madge and produced three aces for Jessie Rods. Many good dogs have Grand Champion Perdro up close in their breeding ,such as ,Yogi’s Pedgie, Hoffman’s Champion Bronco,Callender’s Krokus,Dolf’s Black Powder,Dolf’s Cherry,Dixie line Connection ‘Runt,Dixie Line Connection’s Champion Bolero,Hammond’s Ralph,Jesse’s bashful,Rushing Bill’s Tar Baby Reverend Dack’s Sissu,Arellano’s Midge,Garner and K Hall’sJammin Jenny and Crenshaw’s Bad Mamma along with many more that are just to many to list. I honestly believe that the people that let Grand Champion Pedro pass by the were honored to have know this little dog for a short time. I personally bred Grand Champion Pedro to a lot of good bitches and the rewards were great .I had breeding rights On Grand Champion Pedrountil this death.I sold Pedro to M.R. Harris of Hillsborough,NC after a short stay there he was sold to Toml Garner .Mr Garner made several  breeding’s that produced some damn good bulldogs. During the time Tom had Grand Champion Pedro I was living the life of outlaw up in Tennessee,Tom sold the little fella to a fella up in Canadawhere he died.

I stay in close contact until this fella got out of the game. Like I said Crenshaw and Dow deserve to be recognized as Grand Champion Pedro breeders.The rest just was me and Pedro.I took care of him, conditioned him,and help to heal him,with little or no help. Pedro did the rest on heart and talent,between us we made a dynasty,the Pedro dogs.Now his followers are doing like wise!Building on a true bulldog.So now when you see his name on a pedigree you will know that a real bulldog is there! Snakeman’s Grand Champion Pedro R.O.M. will be longed remembered when the folks that talked negative about him are dead and gone. Long after those that talked negative about this great dog are dead and gone ,fanciers will still recognize the merits of Snakeman’s Grand Champion Pedro ROM