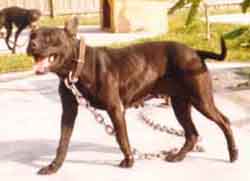 Before we begin our review on Grand Champion “Shady Lady”, lets talk just a little about the one they called The Rebel. Lets talk about The Rebel long before the troubles came about that tarnish the fraternity and tainted his own legacy. To those who actually knew him, you could say he was a true Dogman at the height of his game! It has been said, and rightfully so, that Ricky Jones, “The Rebel” owned some of the best dogs in the world. In his time, if The Rebel was not competing one of the best dogs in the world, he was standing sixteen feet across from one. He was a man dedicated to his dogs and a firm believer in the “Eli” stain of dogs. You could not convince him that any other bloodline was better, but you were always more than welcome to try…in the box!

Any modern day fancier would be well served to compare the record of The Rebel to anyone during the same time period. In fact, compare it to anyone, from any time period, and see how it stacks up.

Ricky Jones was noted for having, for lack of a better description, a ‘split personality’. On one side he was a great, fiercely loyal friend. However, once he stepped inside that box with his dog, well, he became a fierce and formable opponent. There were many that described his actions as “unsportsmanlike conduct”. The Rebel did not see it that way at all. He stated that a man and his dog were a team and had to work as one. While his dog did what they could do to discourage their own opponent, Ricky Jones felt that it was his responsibility to do all he could do within the rules to discourage the other handler. He stated that, in his experience, a dog will quit the very second his handler does. Never the less, The Rebel became known in history as one of the greatest competitors of his era. It is a fact that, it was The Rebel that added to the history books great dogs such as Grand Champion “Sandman” and Double Grand Champion “Tornado”. Many stories have been told and written about these two great dogs, but none to my knowledge has ever been told or written about the great female that holds her own records in history. That female is none other than Rebel Kennels Grand Champion “Shady Lady”.

Some fanciers have wondered what it was The Mountain Man and The Rebel must have been thinking or planning, when The Mountain Man backed his famed “Spider Bite’em” female up to Rebel’s “Sundance”. They stated, whatever it was, it was history in the making.

Well, here is exactly the way it came about. A fancier by the name of Young had purchased “Sundance” directly from Mamie Loposay, the wife of the deceased J. R. Loposay. “Sundance” was an outstanding dog and The Mountain Man had already seen him in action a couple of different times. The Mountain Man stated that, without exception, “Sundance” was one of the most devastating stifle dogs he had ever witness. He liked the dog so much that he planned to buy him for himself. He told Ricky Jones about this great dog and worked out a deal with The Rebel to go a buy the dog for him and either bring it to him or arrange to have it brought to him. Well, half of that happened. Ricky Jones did in fact go buy “Sundance”, but then he kept him for himself. The only option The Mountain Man had at that time, he took. He shipped “Spider Bite’em” to Florida and had her bred to the 2 time winner, at that time, “Sundance”. Now, the rest is history. The litter produced such great dogs as Harriger’s “Lil Dumpling” & “Sheena”, Mountain Man’s (Harriger’s) famed stud dog “Elwood” and of course “Shady Lady”. 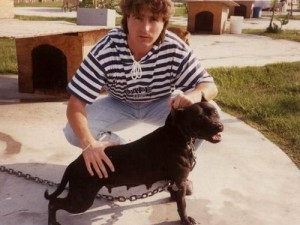 Ricky Jones was known to be extremely hard on his dogs. Too hard, and unnecessarily hard, most fanciers would say. But, he was who he was, and even though Ricky Jones was not a small man, his own ego was bigger than he was! Even at an early age “Shady Lady” wasted no time it showing that she was more than ready to face most challengers. In the year of 1988 she won her first two professional competitions.
It was at the early spring show in Florida in 1988 that “Shady Lady” made her debut. It was a three card show that also included Rebel Kennels and Ken Allen’s Grand Champion “Tornado” winning her sixth straight contest. This one over Perry & Devine’s two time winner “Emi”.

One of the later reports listed “Carmen” as being campaigned by Red Kennels & Mossell’s “Carmen” not just Mossell. However, in either case, Mossell’s “Carmen” was a red female that stems from some of Anderson’s Champion “Tonka” breeding that came by way of Laminack. Upon release “Shady Lady” jumps off to a very fast start and “Carmen” was never even in this fight! Fast handles are made and “Carmen” will not run her first scratch at the four (4) Minute Mark and “Shady Lady” is declared the winner.

It was at a five card show later that fall in 1988 that the ticket would read Red Kennels’ “Nantucket” verses Rebel Kennels’ “Shady Lady”. The females weighed in at 37½ pounds and The Tennessean was selected to Referee this contest. “Nantucket” was a nice looking buckskin, said to be sired by “Little Jeep” (Jeep x Kate) whelped by a “Kingfish” bred female. Evidently Red Kennels did not take their four (4) minute loss with Mossell’s “Carmen” very well. As recorded, this one did last longer.Once again, upon release “Shady Lady” comes out hard and fast. “Nantucket” leave the pit at the Eleven (11) Minute Mark and “Shady Lady” is declared the winner of her second professional contest.

(This was the same show that Rebel Kennels’ “Samson” and his littermate sister “Dolly” both won Best of Show Awards. “Samson” Best of Show, “Dolly” Best Female.)

By the end of 1988 word had spread far and wide about this hard mouthed female by the name of “Shady Lady”. Most fanciers thought that was all she was, a hard mouth female. By this time, there were a lot of fanciers determined to stop her.

It was at the Palmetto Show in the spring of 1989 that the ticket would now read Rebel Kennels and B.& B.’s “Shady Lady” facing off to Gilbert & Bert “Bolita”. Havana Danny was selected to be the Referee for this contest, as the females weighed in at 37 pounds. Bert is handling “Bolita”. “Bolita” is sired by “Kong” and nothing has ever stayed with her more than 18 minutes. Upon release “Bolita” comes out hard and shows that she can bite! She almost immediately hits a bleeder on “Shady Lady”. In spite of a very bad bleeder, “Shady Lady” stays all over “Bolita” and proves that she has a bite of her own! Bert concedes the contest and picks up on “Bolita” at the Nine (9) Minute Mark, leaving Shady Lady” to be declared the winner and now Champion. Out of a three card show, Rebel Kennels “Shady Lady” was voted Best in Show.

At The Mountain Show in 1989 “Shady Lady” would come out again. The word was out that she had won three matches, but all of them in very short order. This time she would face Reynolds’ “Red”. “Shady Lady” came in at a lower than usual weight, as these females now weighted in at 36½ pounds. Any seasoned dogman can tell you what a difference a half a pound can make, even in a good dog. The Tennessean was once again the Referee. Reynolds’ “Red” was sired by Pat Patrick’s “Copperhead”. Upon the command to “pit”, “Shady Lady” came out so fast and hard herself, that she never even gave “Red” a chance to close her mouth! Bulldozing over “Red”, “Red” turns and is on her way out at the Seven (7) Minute Mark and “Shady Lady” is declared the winner of her forth contest. Rebel Kennels “Shady Lady” was voted Best Female of Show.

It was at the seven (7) card Southern Fall Show of 1989 that “Shady Lady”, now a four time winner, looking for her Grand Champion, would have to face Mooney’s “Ginger II”. Mooney’s “Ginger II” is a black & white female sired by Holland’s “Pee Wee” and whelped by Holland’s “Ginger”. These females weighed in at 37½ pounds and D. Miller was selected as the Referee for this contest. Upon release “Shady Lady”, came out in her usual hard fast fashion and went straight to work. “Shady Lady” shot into the stifle and “Ginger II” never even had a chance to get started. She had no chance at all in this contest. “Ginger II” is picked up at the Eight ( Minute Mark and D. Miller declares “Shady Lady” the winner and now Grand Champion. Once again, out of a seven (7) card show, “Shady Lady” was voted Best Female of Show.

That night “Shady Lady” was awarded her Grand Championship Title. She had won all five professional contracted fight in a combined time of only Thirty-Nine (39) Minutes! Her longest contest went only Eleven Minute and out of all five contests, she was voted “Best of Show” three different times! Surely that was a record and truly history was made that night. Not so many fanciers were so anxious to rush out and try and stop her after that! 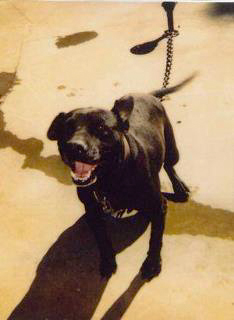 After The Rebel experienced his own problems, and all the trouble that followed after that, the fancier known as Bulldog P ended up with quite a few of the dogs that belonged to The Rebel. Grand Champion “Shady Lady” was one of them. The legacy of Grand Champion “Shady Lady” lives on, as she produced a lot of great dogs for the fraternity. Those off-spring also proved to be outstanding producers as well, especially when bred to James Crenshaw’s Champion “Gator”.

Bulldog P later sold Grand Champion “Shady Lady” at an old age to Roadblock Kennels, where she passed away and a legend passed into history. Anytime anyone is lucky enough to witness what they feel would be the highest levels of abilities, bite and stamina, Grand Champion “Shady Lady” should come to mind and with whom they should base their own comparison, for she should be considered the highest of standards!

By 1989 Abraham’s “Queen of Hearts” and Rebel Kennels’ “Shady Lady” both held their respective titles of Grand Champion. Both had been campaigned 37 and 37½ pounds. Can anyone possible imagine the battle that would have incurred should these two great warrior females ever had met. There is no doubt that it would have been a classic for the history books. As great as the one between Rebel’s Grand Champion “Sandman” and S.T.P.’s Grand Champion “Buck”. One can only wonder and imagine what it might be like.

However, there is no doubt that these dogs, all of them mentioned here, and the men behind them, gave to the world a true legacy of proven gameness and ability to be passed forward and preserved by future generations.