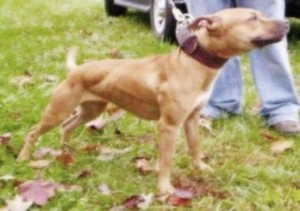 Honey is out of White’s Tab Jr. bred to Wildside’s Tuff- E-Nuff. She was a gift from my mother and the best gift that a mother can give to a son/dogman. She was the smartest pup I have ever seen, she always found a way to win the hearts and minds of people. She even won my mother’s heart, it never cross my mind that my mother will allow a dog inside the house but Honey made her way into the house, and became my mother’s housedog and friend until she was giving to me when I returned from the Ghan.

I had to promise to my family that I was not going to put her on the yard and that she was only going to be a pet. Well Honey became more than a pet, she became family member, she when to road trips with me, ranges, training and you name it she was there. After my son was born, she became my son’s guardian angel and I have never seen a baby and a dog take care of each other so  well. I could go on and on and tell you how beautiful, smart, sweet, loyal Honey is, but is time to talk about her production record. Honey bred to Norman’s Rock (2xw-1xgl) produced CH. Roja (4xw), Missy Eliot (2xw), J-Lo (1xw), Deuce (2xw-1xgl) and Sweety (1xw). Honey bred to Pinolero’s CH. Humpy produced CH. Kodiak (3xw) and Lil’ Honey (1xl-dg). Honey bred to Hooper’s Rhino produced  CH. Lady (3xw-1xl) and Lil’ Rhino (1xw-1xgl). Honey was bred back to her son CH. Kodiak , I’m waiting to see what the outcome is. Pinolero’s Honey as well as producing top quality bulldogs is also passing her production quality to her offsprings. Missy Elliot one of her daughter, which is owned by the Azteca Boy, has already produced three 2xw and one 1xw. We will be only breeding  Honey two more times and she will be retired. She will be bred back to her son Lil’ Rhino and the last breeding will be open to a good stud. I just want to say thank you to my mother for giving me the opportunity of owning such a great bitch. In addition, I will like to thank my good friend E.F. (WSK) for his advice in using Honey for brood stock. Honey has made a great impact in our breeding  program and other dogmen/dogwomen, her blood is here to stay. Due to a situation that was above my control I had to sell her to Wild Bill Cody. I know that Cody will continue Honey’s legacy and follow my advice on who to breed her too. Thank you Honey for being a great friend to me and the family.