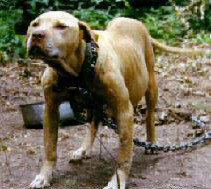 Hollingsworth’s Ch. pinky was born July 7th. 1989 the result of a second generation breeding by Mike & Dot Kelly. They had a deep game bitch named Ruby out of Jone’s Ch. Smoker and Frank Rocca’s Red Gal that they bred to Patrick’s little Tater and they bred a bitch out of that breeding to Laminack’s Trouble a son of Ch. Tonka that produced Ch. Tara and Ch. Flint to produce Pinky’s litter. Pinky was sold or given to the late E. Hollingsworth as a pup. Ed Farron in turn purchased the pup(Pinky) from Mr. Hollingsworth along with several other dogs. Pinkys first roll came at about 18 months of age, a real rough hard biting bitch by the name of sugar Mae was used and Pinky was the down dog from start to finish @ :25 Pinky never made any bad moves and made a stumbling scratch. A couple months later a young Jeep/Nigerino bitch was put on her, and Pinky was used to start this bitch. When the bitch got onto Pinky’s nose Pinky made a lot of bad signs, she even went as far as turning away from the young bitch. At this point most felt that Pinky was a cur. R. Davis really wanted Pinky and asked Ed repeatedly for her. Ed agreed to let Davis have the dog with the stipulation that if she did indeed turn out to be a game dog that they would get pups back from her in future litters. About 3 months later Pinky had been sold again and at this point it was still thought Pinky was a cur. Looking back Ed felt that Pinky had never turned on @ 18 months, and Pinky was not ruined permanently in her second roll and got another chance that most dogs never get. After all Pinky’s littermate Manson had lost his first match in over an hour and won his second dead game. Far too many dogmen feel that at 18 months a dog should be ready to be tested and rolled hard, while it is not feasible to hold a dog beyond 18 months for most large dog yards. There have been many a great dog that did not turn on till later in life, and have gone on to become Champions and grand champions. Pinky was sold again to Hilltop Mike and it was Mike who set Pinky down for her game test on a very hard biting bitch and tried to stop her. With all he had heard about her in her second roll he was very concerned she was a cur she went :45 min. with this bitch and never made a bad sign. Mike then decided to match her @ 42 lbs. Pinky came in at 41 and won in :38 after an all out war, with both dogs dishing out lots of punishment. Pinky had won best in show over 4 matches that same day; some of the dogs of mention were the untouchables Ch. Butkus, McDaniels Feisty & Gaston’s Pea. One report in the American Warrior wrote Hilltop Mikes Pinky vs. Newjacks “Leather” females @ 42, Pinky plows a field through leather and leather takes the count @ :38 another match reported was against the Untouchables Vixon vs. Hilltop Mikes Pinky females @41 Pinky a 1x winner Pinky does the barnstorming and Vixon takes the count @ :06 I believe Vixon was lost after that show. And Pinky was on her way to becoming a Champion. Pinky goes on to win another in :17 with a pit kill, she was sold again this time to T.R. he kept Pinky for a while and she was sold again to Killer Bee. At 5 years of age Killer Bee matched Pinky again and she wins in :31 with yet another pit kill. At 6 years of age she is matched again this one went 2:36 with no turn or out of holds and Pinky is picked up game and makes a stumbling scratch, this was by far Pinky’s greatest test and with all odds against her she finishes with a game loss.

We had heard that Killer Bee was in the market for some younger dogs and asked if we were interested in Pinky, needless to say we wanted her at any rate we worked out a deal for a 1x winning son of Stratton’s Mozart (Bill) out of CBK’s Olive Oyle Popeye has gone on to make his gr. ch. and to date has won 7 shows and made over 30,000.00 in his carrier. Pinky was in rough shape when we got her and we did all we could to get her back to health and bred her to Popeye’s littermate Beekman (dead game); from that litter came Whitehead, a good brood bitch we have here and Jake, a winner himself. The second breeding we made was to Stark’s Jasper (CBK’S), a double bred son of Patrick’s Macho Jr. dog. While these pups are still young they are showing a lot of promise: one that comes to mind is CBK’s “Jinx” and two others that have been rolled and have shown excellent results. We expect to see dogs matched off that breeding this year.

After Pinky’s breeding with Jasper her health began to decline rapidly. While she had a lot of problems with old injures, her greatest hurdle was yet to come: heart failure. At this point knowing Pinky could never be bred again we decided she would be just an old dog we would keep around through her later years, and a great conversation piece. Pinky was one of a kind, as I knew her, she was one of those once in a life time dogs that every dog man dreams of owning. Her temperament was un- surpassable and of the kind we would like to see in all pit dogs, her heart was as big as they come, her mouth was as hard as they get and her ability to get the job done was beyond what most of the so called fast lane dogs of today are. At the age of nine her health had declined to the point she was no longer enjoying life the way she always had and I felt it was in her best interest for me to make her final scratch, one of the hardest I have ever made. As she slumped in my arms the tears ran down my face although I had never campaigned her or saw her many victories, her life had flashed before my eyes. In the spring of 98 she was laid to rest in Chapel Hill, NC. Her sons and daughters live on at Cedarbrook kennels to follow their dams footsteps.

Ch. Pinky was center fold for the American Dog Breeders Ass. Summer of 98 vol. 22 issue 4. A poem was written beside her picture that reads:

“As we pay tribute to mothers day, its only fitting we do. Select a bitch that lights the way, she’s Hollingsworth’s Ch. Pinky, tried and true. The path she traveled far, “she’s much to young” an old man said, surprise them all, become a star. The bloom of youth did never fade. A look, a sigh, she twirled around, A flirt a bark, “please see me”. She even climbed a peach tree. A residential change took place, “perhaps they’ll be much kinder. And put a smile back on my face, Like my video rewinder. Soon the luster of the show, remained, just a memory. The bloom was gone indeed, although, she felt was temporary. When born the date was eighty nine, “she’s damn near pink, that red nosed bitch. She’s full of spunk, and body fine, She’ll be a Champ, without a hitch.” She settled down, but still was young, her thoughts were on the future, On show time day she’d come unstrung, as empty crates passed by her. “What’s up! ol’ gal, you’ve had your fame, A mother soon you’ll be, Reminds me of your mother game, You’re like your grandma Ruby. She wasn’t wrong, for dog men say, Its seeing is believing time. There’ll always be that one more day, And Pinky she did shine, She’s gone on now, a life well lived, Her sons did make her proud. She had it all that life could give, She always played the crowd.”