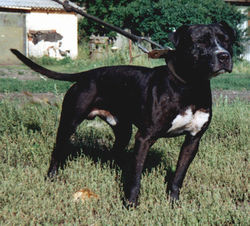 NEMO was born 25 May 1996 in Kamensk-Uralsk. He was strong and energetic puppy who grew up in a folded athletic dog with a good health and great potential. The first was the role of Nemo when he was 14 months. In the 15-minute role with the enemy, which was at 1, 5 kg heavier, Nemo showed attacking style of battle, a strong bite and a good quality fighter. At the 15 th minute opponent refused to fight. In Nemo, it was a few roles, and then – a test in which Nemo has fought against his father, a strong attacker in the chest dogs.

In spring 1998, Nemo has been signed in the first game and 5-June came in the ring against one-time winner named APT. In Ekaterinburg there was a hot sultry weather. Nemo attacked in the throat and chest, a APT kept him in the head. At the 4 th minute, Nemo made a good capture, and APT made a turn. On the 9 th minute Nemo begins to dominate. Nezahvat in the 13th minute, and listened to by APT. Nemo is “winning” scratch. Because in this game Nemo had not received serious injuries, I decided to put it on the next match. I called for the match twice winner VIKA (RED BOY / JOCKO) in Izhevsk, who won their victories against major rivals. 26 September 1998 Nemo left the ring a second time. We had a long time to get to the venue of the match, but two days of rest allowed to fully recover Nemo. Nemo literally swept VIKA, attacking him in the neck, shoulders and chest, not letting him go. On the 18 th minute, the owner withdrew VIKA. He managed to save, but the game VIKA career was finished. Soon, the show in GMK, I arranged for the two games: The Chelyabinsk – against Budweiser, from Sorrells, and in Tyumen – against BUTCHA bloody RED BOY / JOCKO / JEEP. During the training sessions because of the cold weather had to change the diet, as a result of this weighing on Nemo weighed 24 kg 6. instead of 24 kg. A new contract and 27 December 1998 Nemo third time out in the ring. BUDVAIZER strong attacks in the chest, while Nemo keeps him in the head. BUDVAIZER dominated the first 26 minutes of the match, causing serious injuries Nemo shoulders and chest. Nemo able to do enough in the throat, and then attack the enemy in the chest and shoulders. In the 33rd minute BUDVAIZER made a turn. Nezahvat on the 37 th minute, and BUDVAIZER not out of the corner. Nemo is “winning” scratch. Nemo has received serious chest injuries and had to work hard to be cured. After 3 months, Nemo was able to start training, and after a further 2 months Nemo was exhibited at the 4 th match. Tyumen, May 15, 1999. Nemo attacks in the chest and throat, BUTCH – in the chest and legs. In the 23rd minute BUTCH made a turn. Dogs fighting in a high speed and serve to 4 scratch. Nemo begins to dominate, attacking BUTCHA in the chest, neck, shoulder and causing him severe injuries. On the 58 th minute BUTCH is a 5-second scratch, and the owner removes the dog. After this match, I wanted to close the Nemo show, as well as severe chest trauma in the 3 rd game and damaged paw in a 4-m is not given full opportunity to coach him. But after 2 months was a call and I offered to put Nemo against double winner named Semyonov, the son of Zoran’s BILY 5xW / 1hL. SEMYON won 2 matches, literally destroying their rivals, and its owner was not easy to find a worthy opponent. Well, such a competitor could only dream of, and the contract was signed. 10 October 1999 in Kemerovo worthier two dogs meet in the ring. Nemo attacks in the head, chest and throat. The match takes place at high speed. Dogs are attacking each other, causing severe injuries. In the 33rd minute SEMYON doing enough in the nose, intense as a sponge. Nemo managed to free themselves from the grip, and he attacks again in the head and legs. Dogs met on 3 scratch. A SEEDS broken legs. On the 50 th minute Nemo begins to dominate. At point 1: 18 SEMYON was withdrawn.
This is the 5th match career victory ended one of the best fighting dogs – BVS ‘ NEMO