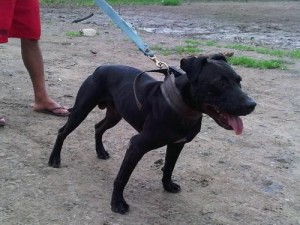 Croata was born of a litter of 8 puppies of our breeding thought by my partner at that time A.C. off our pure Croatian blood stud dog called Vili II. His father was the famous Ch. Vili II 4xW and his mother the killer Rika 1xW and 1xl dead game against the famous European killer Rika 2xW. Vili III was a very game dog without much mouth to compete. Vili III was bred to Tonka 1xGL, daughter of Clyde (double son of Gr. Ch. Mayday) with Mr. Ramos bred dog basically old carver stuff. All 8 puppies were black, but Croata was the pick of the litter that I named him after his bloodline origins, dominated all his siblings, he was wide open from an early age.

At the age of 11 months I rolled him for the first time against a direct son of Gr. Ch. Machobuck that was very intense and 5 pound heavier than CRO, but Croata dominated him with head holds shaking every time, so showing to be a very smart, intelligent dog, an “artist”. His second roll was against a Jeep/Redboy/Rascal/ Frisco bred dog with a touch of Iceday blood on the bottom side, this time was around 12 minutes where cro dominated and controlled by the head until the 9 minute mark where he went to punish the rear end, from this point on Cro had absolutely control. The owner of the dog picked him up a few minutes later. His third roll turned out to be his Cro’s game test against an excellent son of Southern Kennels Bambam POR with a daughter of Southern Kennels Clyde, pure Mayday bred dog. This dog called Dede was known for dominating his opponents by the neck, he did this against Croata which he ran hot the first 15 minutes and after making a turn, Cro started to find his fight by the head and rear end when he could until the 49 minute mark, Cro was making his move and stopped Dede at the 52 minute mark. Croata ran his scratch like a train.

#1 August : Croata’s first fight was hooked against a 1xW hard mouth Boyles/Fargo bred dog called Blackie. For this fight I tried to put Croata against all odds, his keep consisted of only 4 weeks of walking, the weight of Croata is 39 pounds, so for this he was at 38, one pound under his pit weight. I took Cro and traveled to quito the same dog of the fight. We must remember that Croata trained in a different weather conditions. Anyway Cro and Blackie weighted 38 pounds; Blackie was so huge compared to the slimmer Croata. During the fight Croata controlled Blackie with ear and head holds for the entire pit with Blackie entering the rear end occasionally but Croata keeping him out, then approximately @43 minute mark Croata was doing damage to the throat and rear end of Blackie, at 51 Blackie begins to protest and Croata is putting him away, Blackie’s owner picked his dog up. Blackie stood in his courtesy scratch. Cro was incontrollable in his corner ready to show his courtesy scratch, but the judge or the other side let us release my dog. Cro has enough air and stamina to fight for 1 more hour.

#2 October : His second fight was hooked after 2 months in 39 pounds against a dog that was gaining fame due that he was a killer machine named Colorados Red Fargo, son of Colorados Knls Kurdok 1xW, 1xGl with Lady Rommel blood on his bottom side. Cro looked so small compared to Red Fargo, but both dogs were on weight. On the fight day I noticed that Croata gums were really pale and he was sluggish, but I decided to do it anyway. Croata run hot the first 10 minutes grasping for air while Red Fargo was doing a lot of damage on Croata’s face, he bite so hard that he opened a big gauge on Croata left eye, I thought at that time that Cro just lost an eye, he was bleeding profusely, Croata made a turn in order to cool off and try to get his second wind. I would like to be explicit on this issue, Croata is so smart adapting to any circumstances and he does whatever it takes to overcome anything in front of him to prevail during a fight, he is a winner! At the 30 minute mark Croata is biting hard on the rear end with Red Fargo protesting, at 37 both dogs are handled and taken to their corners, Croata made an impressive scratch demonstrating that he would stay as long as he needs, Red fargo stood in his line. Croata ran his courtesy scratch like a train knocking both dog and handler in the corner.

#3 February : For his championship after 3 months, I hooked him against Ranger kennels Sutnami, a grandson of the famous hard mouth Lionheart 2xw 1xLG with a double Mayday bred female on the bottom side. Both dogs on 39 pounds. Sutnami a very intense dog met Croata in the center of the pit taking mouth holds for the first 5 minutes, the Sutnami to the rear end but Croata kept him out using his body and the pit walls artistically, then Cro went for shoulder holds showing a devastating mouth. No turns or out of holds, Sutnami is picked up at the 34 minute mark and ran across showing what a game dog is all about. Croata made a fast courtesy scratch earning his Championship winning “ Best in Show” trophy that night!!!! He became a Champion in 6 months.

#4 August : For his fourth I hooked him against D’Crijal Tontin, son of South America Ch. Luigi (Brother of the famous Gr Ch Lukane), Tontin siblings are Ladrillon 1xW, Chato 2xW and many others. For this one we drove 28 hours before entering the pit. Ch. Croata demonstrated his ability, natural air and gameness to prevail against a hard face dog like Tontin. At the 1 hour and 28 minute mark Tontin is picked up and scratched literally on his shoulders earning the “Gamest in Show”. Ch. Croata 4xW completed a fast courtesy scratch as usual showing everybody what a complete dog he is, an “Artist”.

AFTER THIS IMPRESSIVE WIN HE WAS HOOKED AGAIN FOR HIS 5TH, SOME FELLOW DOGMAN OFFER IMPORT A 1xW FROM USA TO COMPETE INTO CH CROATA, BUT JUST NOW WE RECEIVE THE VERY BAD NEWS THEY DECIDED PAY THE FORFEIT, AND SHOW WAS CANCEL. ‘CRO’ IS HOOKED AGAIN FOR HIS GR. CH. GOING UP 1kg (2,2 Pounds) AGAINST A HARD SPECIALIST FACE DOG 2XW BIS EARLY 2010.

#5 February : For his Gr Ch match I tried to find the best dog it was on the game, my good friend G&G had Kandiru, who we tested hard and demonstrated to be an unbeatable dog, I always thought that Kandiru could have beaten Croata. G&G hooked Kandiru against Imperios Kennels Iron Black 1xw, a dog known for being a hard biting face dog. G&G and I were very confident that Kandiru was going to beat Iron Black, but this was not the case, Iron Black controlled a game Kandiru for over an hour and beat him in our own backyard earning the best in show that night. Kandiru demonstrated to be a dead game dog that day!!! After this I knew Iron Black 2xW was the dog to beat and the best around. It was so complicated to hook Cro against Iron Black, some of my close friends thought that I was crazy giving up the weight advantage specially against this Hard biting face dog, but finally this were the terms of the contract: We would do it in our Country, but I had to go up on weight 2,2 pound in order to make it happen. Anyway the day of the show Croata did not look the way I wanted, but the match was on. These 2 warriors meet each other in a very tight weight pulling contest, trying to win each other, this time Iron Black was against another good weight puller as Croata. Anyway Iron black had the upper hand and at the 55 minute mark Croata was losing the show, my good friend and old timer from S.K. told me that Croata was going into shockand I should consider picking up, but deep down inside I knew Croata will find his way to the top no matter what, every time he could he would stand up and shake violently and start to get into the rear and front end of Iron Black most often and around the 90 minute mark he turned the show around, he showed everybody what he was made of, PURE HEART AND DETERMINATION!!!!! He weight pulled to win at the 1 hour and 48 minutes and thus making him the Ecuadorian´s legend Gr. Ch. Croata 5xw (1xbis.) He is now retired and only been use as STUD and we will provide him the best life he deserve, GR CH CROATA now is our Pet, he will live with our family and he is very friendly with people and kids, I have to THANKS to the life, because we feel very lucky as we have the chance to have this ONE TIME LIFE DOG.