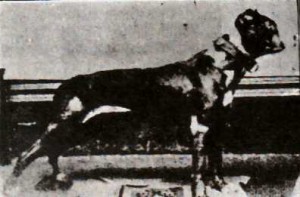 One of the most famous and widely quoted dogs as the foundation stock of Pit-Bull Terriers in America was The Gas House Dog. The Gas House Dog, or to speak more properly, McDonald’s Grip, was a brindle dog with white blaze in face, white ring about neck, white breast and paws. He was the property of the late John McDonald, who at the time of ownership had charge of the gas-house stables in Boston, and who died in 1909. Grip was bred in Boston and was always owned there. He was whelped in the early seventies, dying about 1882. The Gas-House Dog was considered to have no superior in his class at 31 pounds. His most noted battle was with the no less celebrated Blind Dog, which ended in a draw, free fight and wrangle after the dogs had gone nearly three hours. The Blind Dog had previously beaten Burke’s Spring, who, though such a good fighter, was a pick-up of unknown breeding, and an utter failure as a stock dog. The Gas-House Dog, on the contrary, was one of the best as a stock dog, and the only dog that could be compared to him in pedigree was McGough’s Bob, commonly known as Bob, the Fool.

Sweeney’s Fly, dam of Grip, was probably the greatest bitch ever in America. In addition to the Gas-House Dog, she produced, when lined to Gallivan’s Old Prince, the great dog, Thornton’s Pete, who beat Jenning’s Croppy, and died immediately after. To the lining of imported Rafferty, she produced Quinn’s Tony, who was unapproachable in his time at 23 pounds, and Harrington’s Dick, a first-class 19-pound dog. Her last litter was by Burke’s Tanner, and but one bitch was saved from it. This bitch had but one litter of certified record, but in that litter was Gallivan’s Pup and Gallivan’s Young Prince, the dog who sired Turk, who defeated Con Feeley’s Jim at Chicago in four hours and fifty-eight minutes. This battle is mistakenly called the longest on record, but Tugman’s. Paddy and Lloyd’s Toby fought five hours and nine, minutes without a turn or a pickup.

In the summer of 1914, a personal letter from the famous pugilist, John L. Sullivan, advised us that he had purchased a young dog of the GasHouse strain, which breeding he considered the best in America, and referred to the breeders of this strain as John Quinn and the Burke brothers of South Boston, Mass. This letter in “The Dog Fancier” brought forth a reply from Mrs. M. G. McDonald Mahoney, daughter of the owner of the famous Gas-House dog, in which she wrote:

“The one best dog America ever had was raised, trained and fought by Johnnie McDonald of Charkstown, Mass. Just to refresh our friend, John L. Sullivan’s memory, I am going to ask him to recall the time, long ago, when he was known as the ‘Roxbury Strong Boy,’ that he went to Ferrin St, Charlestown, and received a puppy which he placed inside his undershirt as it was a cold day. This, I presume, was his first introduction to Gas-House stock and may recall Johnnie McDonald, who was the donor.”Now most of the old dog men are dead and gone and real sporting blood getting thin, but my statements here can be verified by some of the old timers still living. I take liberty to mention Tom O’Rourke, Pat. McDevitt, or Con Reardon. In conclusion I wish to congratulate Mr. Sullivan on his choice of stock;—the kin of my dear old playmate, the Gas House Dog, Grip, known to all real sports as the ‘one’ best fighting dog the world ever knew. Raised, owned and trained by Johnnie McDonald (ever on the square and a gentleman sport), at the Boston Gas Light Co’s stable, Commercial St., Boston, Mass., from whence the name, ‘Gas-House Dog.’ Out of justice to my late father’s memory, believe me, his devoted daughter, May G McDonald Mahoney, 42 Ditson St., Dorchester, Mass.”