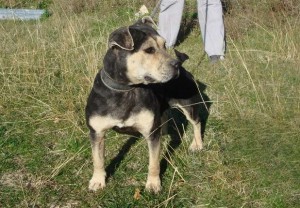 Sirmium Knls called me to come to pick up a female puppy I wanted out of BAMBELA ROM which I had given to him as a gift 10 years ago. My friend from Budva, Simo Markovic, the big hunter, went with me to buy one hunting dog and to see if he would like some. When we came to Neven, I stayed with him talking, while Simo went with Nikola (Sirmium Jr.) to find a hunting dog. Looking around they met some gypsy people and there was one little female which amazed my friend in the way he wanted me to buy her, so after few days of listening to him, I sent the money to Nikola, 300 euros, to give it to gypsy people and to put the Bitch in a bus. Later I got to know she had one win in 52 minutes and about 1000 rolls, because her

breeder, Neven, didn’t go well along her owner, so he wanted to stop her with much bigger and dangerous

females, but he couldn’t do it. Her name was Bibi and it was me to give her name Ciganka (Gypsy woman).

First it took me half a year to get her fully recovered, she didn’t know what dry food was and had never drank fresh water before, her only food were dead fishes from the dumps. Then I hooked her against the best in her weight, Alen’s CH Zuta 4xW. Komany and I travelled to Croatia where we were considered complete outsiders, but Ciganka surprised all, she won with no injuries while CH Zuta was picked up (before this CH Zuta killed all her opponents). For her Champion title I hooked her against Floyd’s CH Tajga 2xBIS. Again, we were considered outsiders, and again Ciganka was brilliant. Tajga was picked up and she gave a Dead Game Scratch rolling 3x over her head to complete it. Time 1:24. Then I decided to retire her and finish her sporting career, because she had very difficult life before coming to me, especially in the period of staying with the gypsy people where she was rolled three times a day. But constant trash talking by Rebus Kennels convinced me to bring her out again this time against Rebus Knl’s Jelena 1xW. Our opponents said their Bitch would kill her in 17 minutes. Again, CH Ciganka proved she is the best at her weight; she stopped Jelena easily in 39 minutes. Her first show was at 15 kg (33 pounds). I showed her at 13.4kg (29.5 pounds) against Alen’s CH Zuta. Later I couldn’t find the opponent in her weight, so I hooked her with Floyd’s CH Tajga in 14.060kg (31 pounds) and for her 4th against Rebus’ Jelena in 13.800 kg. (30.3 pounds) Her style is very difficult for her opponents; she is extremely healthy and strong for her weight. It seemed to all our opponents their bitches would have an easy job, but by the end Ciganka was just a bit 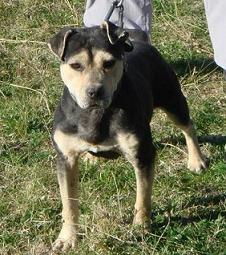 better then her opponents, as much as she needed to win, as American guys say, she is the one of destroyer dogs. Now she is retired, I am 99% sure I won’t let her go for her GR CH title, she deserves to enjoy the rest of her life whelping pups. Since she came to me, she has always been in Keep. I don’t have any pups off of her, so I prefer to see her enjoy now. She proved her quality in short order also without GR CH title, in a period of 5, 6 months, winning over highly regarded champions, Alen’s CH Zuta 4xW and Floyd’s CH Tajga 2xIS.
By Banjo Sozina Kennels.
http://www.apbt.online-pedigrees.com/modules.php?name=Public&file=printPedigree&dog_id=257972