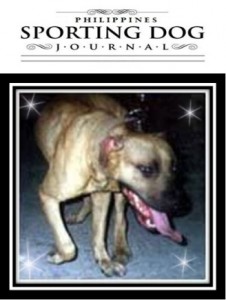 On December 28, 1998, one of the most famous litters in the history of the sport in this wayward country was whelped. When Jay S. of Southernmen bought the sister of Ch. Underdog’s Dante 8xw, 2xL from DT, DADA, she had already been mated to GRCH. Underdog’s POGI ROM. It was not long after pups that later came to known as Ch. PEK’s BAGYO POR, Ch. Rebel’s DAPO, Southermen’s YELLOW 2xW, DUDOY and DADA Jr. popped out of her blessed cunt.
DT took YELLOW as his share and it was from him that VP bought half of the rights to the dog from when YELLOW was at ten months old.
Three months later, there was a roll at DT’s and VP brought him there. YELLOW showed no interest thereat. But when he was tried again a week later against a dog off Southernmen’s TACO 1xW, he stated to act out and had his first taste for blood. YELLOW was both rough and intense, showing great potential. The roll was stopped in five minutes because YELLOW had torn open his opponent’s shoulder.
A month later, YELLOW was again rolled against on of AG’s dogs for ten minutes and he continued to show promise. It was not long after when YELLOW was gametested with JT’s NACHO, a Boyles dog from and hand-picked by TP of Mandirigma. NACHO was bigger and was able to dominate YELLOW, but YELLOW kept on and proved he was ready to make his debut in the box despite his tender age of 18 months.
YELLOW’s weight was opened, DSK came to answer and a match was set at 37m. VP got YELLOW into shape with his littermates BAGYO and KABOG as companions along with AG’s JOHNNY, a son of Grch. Southernmen’s Fox 7xW ROM, working alongside him.

YELLOW made weight with no issues and so did his opponent called MAYHEM, a progeny of DSK’s CUJO (who was then a two time winner).
When both gladiators came face to face in the box, MAYHEM had kill in mind and so did YELLOW. MAYHEM was rough and guaranteed to give anybody a very hard time. But YELLOW was dead-set not to be defeated. Whenever MAYHEM was able to pin him down the carpet, YELLOOW would roll right back on top and give his own brand of punishment. Both dogs swapped deadly holds, until YELLOW got a solid stifle hold and buried himself there. The pain made MAYHEM urinate. VP became confident that the match would be YELLOW’s. At forty minutes, the count was completed and it was time for MAYHEM to make his first scratch. However, MAYHEM stood the line and YELLOW won with very little damage in 35 minutes.

DSK’s CUJO won over Ch. Underdog’s ATILLA and DT wanted payback. YELLOW was what he had in mind to go against the son of Arce’s LINEAR POR at 38m though YELLOW first fought a pound lower. The hook up was made and the match was set- which was touted by many as the Millenium Match as it was to be held at the turn of the century and it was the classic battle between DT breeding and JA breeding.
VP and the rest from Southernmen worked YELLOW first and DT took care of the peaking. However, DT failed to mention that YELLOW’s SGPT had gone haywire and YELLOW’s liver took the toll. Still, YELLOW showed very little of this and the match when on.

In the box, CUJO showed slick moves and talent. He was able to hold YELLOW out with an ear or a face hold initially while the latter tirelessly pushed for domination. YELLOW was nearing exhausting, but his willingness to will was rock-solid. YELLOW was able to get a solid hold on either the shoulder, front end or stifle, but CUJO was eventually able to slip away, though he cried in pain when YELLOW got him good in the stifle.
The initial out of hold count was only completed after fifty-two minutes. CUJO refused to scratch and the match was awarded to YELLOW. Despite severe exhaustion and the liver trouble, YELLOW made a nice courtesy scratch.
Unfortunately, because of the said liver problem, YELLOW passed away not long after the match.
VP paid a visit to Kit of DSK and saw that CUJO suffered from mean gashes despite the fact that he was able to hold YELLOW out most of the time during the match, proving that YELLOW had one hell of a mouth.
Due to his untimely demise, YELLOW was bred only a handful of times. His direct offspring with COLA, who was out of Grch. Underdog’s Pogi and Underdog’s Miriam, were never formally matched. A bitch from that litter called BOOBA was bred to YELLOW’s bellymate CH. PEK2’s BAGYO POR and the outcome was Southernmen’s GONAN; a two-time winner that on his championship match against a hard-biting son of Arce’s JUNIOR was proven deadgame by crawling to continue because his legs were broken.

“The contents herein are purely fictional and are for entertainment purposes only.”