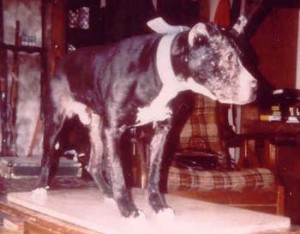 Roadblock’s Ch. Joey was purchased from his breeder in Texas. There was seven in the litter
that was sired by Flowers’ Ch. Sparky out of Blanchard’s (Flowers’) Lucille. David Flowers,
the breeder, kept five out of the litter while Bobby Hall got two females
where abouts unknown. Down to three survivors, two males and a female
shown to be combat minded at an early age.
Flowers had taken Joey and his sister Marcel to roll with some of Gary A.’s (Shankbone’s)
dogs and Marcel would stop when she really got hot and nothing they had up there stayed
with Joey. The littermate brother was said to have a harder mouth than Joey and was thought
to be the better of the two. One day, to the surprise of Flowers, when he came home the
brother was loose and laying by the chain
all busted up. He could see Joey on the end of his chain all fired up.
There was no question what needed to be done, so David Flowers took the brother back to
the scene to see if he wanted anymore of his brother (Joey) and he did not.
He was truly curred out. Joey’s game test came with him giving up six pounds
and going 45 minutes into a rough customer, not ever making a bad move
and scratching hard every trip.
There were some people who thought that Joey was an average dog since he always made
the other dog look bad. Shankbone was one of those people and since he owned some of
that Seger stuff from Pete Green (Seger beat Flowers’ Ch. Dragon) I thought that we might
see how good ole Joey really was. Well, 15 minutes into the contest Shankbone picked upPopcorn. Score evened.
Well there had been this guy calling me about some of the dogs that Ch. Sparky was
throwing as he had some of the same blood in his yard. In fact, he had a female right off of
Laub’s Jesse, also, just like Joey’s dam. This guy was McNasty (Roadblock).
We became friends over the years and Joey was always the first and last thing
we talked about. After Joey’s second contest I had some personal problems
and McNasty / Roadblock purchased Joey.
McNasty / Roadblock: I had been on David and I was just dying to try him out just to get a
look at what Flowers had been telling me. I could not find a dog in the area in his weight
class to roll him with except a very hard biting dog named Scar-back who I really wanted to
put Joey on for the money after we had looked at him. We contacted V & S Kennels and
they said they didn’t want to roll him, they were going to match him next time out and he
was weighing 43 lbs.. We told them ours weighed 41 lbs. and we would give them fifty
dollars for 20 minutes to see if we could stay with the Scar-back dog.
They showed up later that night and for some reason the Scar-back looked huge, but being
geeked up, we released the dogs to go 20 minutes and that’s all they gave us. I weighed Joey
and he was 40 1/2 lbs. and they weighed Scar-back and he was 47 lbs., they carried him out
never to be seen again.
Joey was then healed up. His weight was put out there and he then was hooked into Buns &
Co.. This contest took 22 minutes making Joey a Champion (he killed him in the pit). After
seeing what type of dog he was in shape we decided to go after a Champion, so we started
calling those in our weight class and we hooked into
some guy that owned two of those Champions listed in the Journal.
You can tell the story about that match from your eyes,
I would appreciate that more and the readers would also.
Bill: I had heard a lot of good things about Joey and they all seemed to be true. A while ago
in the swamps of the southeast two Champions showed up to do battle. Irish Jerry was there
with Wayne’s Champion Redman, the judge to be Durant. Both dogs make weight and after
the wash they are quickly released. Both dogs in the first few minutes appear to be in
excellent shape. Redman going in and taking shots at Joey and doing his best, but when
Joey went in it counted. Within the first five minutes I could see the damage that Joey was
doing as he took large holds to the body and loved the kidneys. At ten minutes into the battle
both dogs seemed to turn up the heat as they started swapping holds and going to each
others stifles. This type of wide open barnstorming went on for at least the next six minutes,
but Champion Joey loved the kidneys
and Champion Redman did not have any defense for it, except to turn at 16 minutes. The
turn called and acknowledged ready to handle, it was a handle at 19 Redman to go, he does
straight for the wall. ROADBLOCK’S CHAMPION JOEY, a four time winner.
McNasty / Roadblock: Champion Joey is bred to our Ch. Tater 4x winner.
Ch. Joey was first bred to Two Hawk’s (Simard’s) (Dawnrest’s) Black Missy, Thurmond’s
Crackerjack sired. Ch. Joey was bred to Roadblock’s Medusa, Ch. Beau’s grand daughter.

Future plans: We are presently seeking Gr. Ch. Texas or any other Grand Champion or
Champion in our weight class before we retire him to stud.
We are willing to meet half way. Yours In Sport, Roadblock.