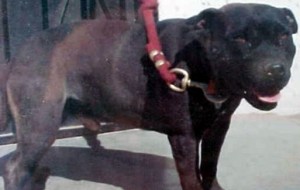 Rancherita’s Little Gator ROM was born on August 14th 1985. He was sired by Garner’s GR CH Spike bred to an inbred female named Miss Molly. Her father was Abernathy’s CH Boy (littermate brother to Garner’s CH Chinaman ROM) and her dam was Abernathy’s Molly (mother of Garner’s CH Chinaman ROM). In this litter there were some good ones like Harris’ Buddy Boy (that produced Garner’s CH Lee Haney, Buddy Boy II 1xW and Valerie ROM), Dead Zone’s Doc Holiday (a dog considered an ace by many that won 5 unreported and 2 contracted matches of which one went over 2 hours into Mayfield’s Leon, a brother to Coy’s CH Leon) and Crum’s China Boy 2xW (that produced well for Crum and Hammonds). Little Gator ROM was purchased by Jerry Wiseman for breeding. And in short time he became Wiseman’s number one stud dog. Little Gator ROM sired more winners on the West Coast than any other dog alive. 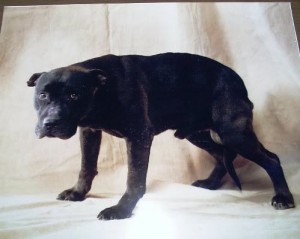 lden State Bulldog’s Tattoo 1xW, a very good producer, and Adelita a straight ahead no nonsense bulldog that could have easily won.  Rancherita’s Little Gator ROM x El Mexicano’s Monster (a pure Nigerino bitch) produced:  El Mexicano’s Peligrosa 1xW  Rancherita’s Little Gator ROM x Ma Baker (a Rascal/Bullyson bitch) produced:  Mapula’s Ali 1xW  Rancherita’s Little Gator ROM x Viera’s Negrita (a Little Gator/Colby/Patrick bitch) produced:  Edgar’s Al Gator 1xW and Viera’s Pokita.  Rancherita’s Little Gator ROM x Smith’s Annie ROM (a Rascal/Jeep-Red Boy bitch), excellent breeding that produced: CH BMW’s Black Angel 4xW (An ace in the pit and one of the best 44 pound dogs around the west coast), CH BMW’s Kimbo 3xW, 1xL, BMW’s Missy 2xW, BMW’s Eli 2xW, 1xL, BMW’s Arrow 2xW, 1xL, and BMW’s Panterita (dam of CH Hobb’s TJ 3xW, 1xLG and BMW’s Xena 2xW that when bred to CH Black Angel produced CH BMW’s Bullet 4xW and when bred to BMW’s Moreno aka Herbie 2xW produced the good producing BMW’s & Sm’s Vanessa and the well known producer of winners BMW’s Ickis 2xW, a game dog that has already produced CH Sonora and many other winners and realize that his stud career have just began)  Unfortunately Smith’s Annie ROM was bred to Little Gator prior to the 1st breeding and did not take.  We have to underline the fact that Rancherita’s Little Gator ROM wasn’t just a good producer of winners but he also produced many other good producers like:  BMW’s Cuervo 2xW that produced CH BMW’s Sorullo 4xW, CH BMW’s (SIC) Paco 3xW, 1xL, CH Logan, Pettie 1xw, Xena 2xW, (Dam of CH Bullet, Ickis 2xW and and the good producing BMW’s Vanessa), Pettie 1xW, 1xL in 2h:20m, SM’s Baby (a game bulldog out of Cuervo x Pow wow) and Inland Empire’s Gunny, dam of the great CH Inland Empire’s Bumper 3xW, a 2x BIS and 1x GIS (1:59, 1:20 and 1:51). Keep your eyes open for the offspring of a double bred Little Gator ROM, double bred Smith’s Annie 2xw ROM dog named Zorro who’s top is Cuervo 2xw bred to Smith’s Annie 2xw ROM and bottom is BMW’s Arrow 2xw bred to a Chinaman bitch. SM is one of few who have what probably is the best Little Gator dogs of our day. High quality powerfull bulldogs.
BMW’s CH Black Angel 4xW that was an ace dog but his stud career wasn’t so long since he got killed in a kennel accident by his daughter Buffy . He produced some good dogs and many of them are still campaining and have also produced well for their owners. Some of these dogs are BMW’s CH Bullet 4xW (actually one of the most requested little gator stud dogs alive),BMW’s & SM’s Chaquiro 2xw, 1xlg, BMW’s Kerker, Yoshi, Superman 1xW, SM’s Mala (promising dogs that we will hear good words about in the near future),SM’s Lupe (the only littermate to BMW’s Kerker and a hard tested hard biting game bitch), SM’s Angela a very game hard mouthed female off Black Angel and Lil Flower, Sm’s Leon (a hard biting game littermate brother to Ch.Bullet), BMW’s Joe Black 1xW (a very game dog), BMW’s Angelica 2xW (First in 43 min at 39pd beating a 2xW and second in 58 min at 39pd beating another 2xW; a game and talented bitch with an extremely hard mouth that is still producing) and Kelly’s Amy Lou born from the breeding with Rancherita’s Lil Flower, a Jeep/Boudreaux/Zebo cross that produced CH Sonora, BMW’s Thor 1xW and some other winners when bred to BMW’s Ickis 2xW.

I would like to spend some words about a dog that i think is one of the best representative of the little gator strain actually alive: BMW’s Ickis 2xW.
Ickis came from the breeding of BMW’s aka VBK’s Moreno 2xw (CH Viera’s Harvey Wallbanger 3xW, 1xL X Viera’s Willie Girl) and BMW’s Xena 2xW (BMW’s Cuervo 2xW ROM x BMW’s Panterita): he is basically linebred on Little Gator Rom with a touch of Jeep/Honeybouch/Boudreux blood from CH Harvey.  He won 2 taking Best In show Winner going over 2 hours and who have seen him go said that he is a really good and game pit dog.  Ickis’ first 2 outings were very hard by any man’s standards (his opponents didn’t make it); after that and without proper recovering he went and lost his first, that was his worst performance ever, still never stopped. He also won 2x otc. Not many dogs could have made the cut after being schooled with CH Black Angel, CH TJ and CH Kimbo. The best part is that he is producing a lot of dogs that are better than him.

This is what he produced: Ch Sonora 3xW, CH Sombra 3xW, Thor 1xW, Brindle 1xL, Misfit 1xW (RIP), Rasha 1xW coming out soon, the other two that were ready to take on one their own weight was SM’s Tank and Speed, both very good, Tank could not overcome the attack of over one hundred bee stings and passed while the other one was stolen. The rest are starting their schooling and doing great. Let’s note that BMW’s & SM’s Vanessa is producing just as well as her littermate brother Ickis.  So as we can see, the genetic contribution of Little Gator blood is still strong in his ancestors and this do not happen in many other good producers. This mean that Little Gator blood put good basis on his offsprings and if you make the right selection you will have a yard full of dogs that can have it all: gameness, ability, stamina, mouth and intelligence.  Most important of all is that all these dogs, when bred right, and given a fair chance to mature, really know how to win!!!  This article was contributed by our friends. So we would like to give Special Thanks to: Viera Brothers Kennel, Rancherita Kennels,The whole Wiseman family, Leprechaun, and all the others that helped me writing this.