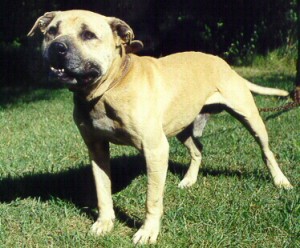 “Reno” was born at Ronald Boyles’ on July 9, 1984. His father was Holland’s GR. CH. “Cherokee Chief” ROM. His mother was Boyles’ “Dirty Mary” ROM. This was Ronald’s second litter off “Dirty Mary”. When she was first acquired from Pat Patrick she was bred to Patrick’s “Four Bits”. This was a small litter that included “Chainsaw Red”, the mother of “Limited Edition” ROM. The litter off “Cherokee Chief” and “Dirty Mary” was a large one, I believe “Dirty Mary” raised 12 pups. Ronald told me that, because it was so large, he ended up losing track of several of the pups that he had from it. Even so, it included CH. “Bolt Action” ROM, CH. “Mr. Rogers”, CH. “Reno” ROM, “Lugnut” and “Crankshaft”. “Reno” spent his youth with Santos Fred. Fred was a serious dogman who was located in the same general vicinity as Ronald. “Reno” looked good in his early rolls and soon established himself as a top prospect. His basic style was to bury himself in the other dog’s chest and stay there as much as possible. 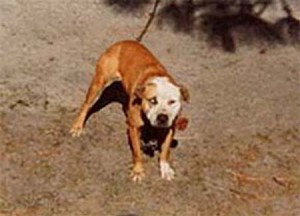 He was very strong with a lot of mouth and was able to overpower many considerably larger dogs.After winning a couple off chain matches Fred matched “Reno”, winning with him against a dog out of Southern Florida called “Popeye” at forty one lbs. As expected, “Reno” buried himself in “Popeye’s” chest and ended it in about forty five minutes. Fred was so impressed with “Reno” that he decided to match him into CH. “Flint”. The only problem was that the match was to be at thirty eight lbs. Now Fred knew that this was likely to be a struggle since “Reno” had always been kept butterball fat at Fred’s house. Fred being a butcher, “Reno” was kept on a diet of mainly meat and ate quite well, probably generally weighing in the mid to high forty’s. For the match, “Reno” came in at this lighter weight looking very drawn down. Even so, he was able to do quite a bit of damage to “Flint” during the course of the match which went about 1:50. As often happens with such significant weight loss, “Reno” ran out of gas after most of his damage early. At the end of the contest “Reno” went into a seizure and collapsed in his corner. “Flint” scratched to win with “Reno” unable to stand. After the match, “Reno” recovered while “Flint’s” owner was unable to save him. When we talked about this match, Fred was very emphatic that this match should not have been a loss for “Reno” He said that “Flint’s” final scratch was most certainly a foul. “Flint” was in very bad shape, barely able to keep his feet. When released he staggered along the wall and had to be guided by his handler’s knee several times in order to find his way to “Reno’s” corner. Fred asked for a foul since “Flint”s” handler had both touched his dog and left his corner in the process.
This foul was disallowed by the referee who was a friend of “Flint’s” owner. Fred said that this criticism was not meant to take away from “Flint’s” gameness but that he didn’t feel that “Flint” could have completed his

scratch on his own and the match should have been a draw. After a rest, Santo’s Fred took “Reno” back up to forty one pounds and matched him into a group from the Tampa area. Once again, “Reno” dominated, winning in his usual style in about forty minutes. The next match was into Murphy’s “Pacman”, again at forty pounds. “Pacman” was an “Eli” bred dog. “Reno” totally overpowered “Pacman” staying in his chest for most of the thirty minutes the match lasted until “Pacman” gave it up. “Reno’s” next contest was against Rebel’s “Chocolate Soldier”, a one time winner off Diamond Jim’s “Luther” and Patrick’s Angel Face”, a sister to “Dirty Mary” ROM. Here again, “Reno” was taken below forty pounds, coming in at about 38. This match went much like the one with CH. “Flint”. “Reno” got ahead early, ran out of gas and went into a seizure at around the 1:30 mark “Reno” recovered from the seizure in about 15-20 minutes and was OK afterwards. “Chocolate Soldier”, however never did recover from what he took from “Reno”.At this point it seems worth mentioning that while no will ever know why “Reno” went into these seizures I have seen this happen to human athletes that are drawn very fine when participating in endurance activities. I believe it has to do with burning muscle tissue for energy and toxic by products that result.

The only time “Reno” had these seizures was when he was taken below forty pounds. In all the times he competed at above forty pounds, he never had a problem. After this match Fred had a few personal problems and turned “Reno” over to a friend of his, Space Cowboy. Space Cowboy was known as one of the best conditioners and handlers in that part of the country. He took “Reno” back up in weight and immediately challenged Ricky Jones at forty three pounds. Jones was very confident, feeling that “Reno” was a cur because of his failure to scratch in his two earlier matches against “Flint” and “Chocolate Soldier”. He made numerous statements to this effect to his friends. Ricky’s “Bandito” was outclassed and was in serious trouble from about fifteen minutes on. Ricky, noted for being less than the consummate sportsman in the square, tried tricks such as dribbling spit into “Reno’s” nose to make him release his hold. Finally, in desperation, Ricky started pounding on the rug in front of “Reno’s” face, raising considerable dust in the process. 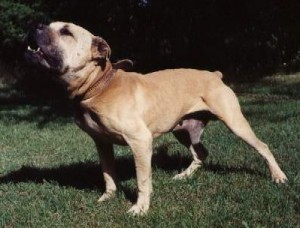 After a bit of this, and not getting much resistance out of “Bandito”, “Reno” released him and bit Ricky on the wrist, breaking an expensive watch in the process. Infuriated, Ricky pulled out a knife and threatened to cut “Reno’s” throat. Santos Fred, at pitside, commented that Ricky wasn’t the only one with a knife and Ricky apparently decided that it might not be the thing to do after all. Ricky finally picked up at about forty two minutes. He demanded that Space Cowboy courtesy scratch “Reno” saying that if he didn’t he was going to report that he was a cur. Space Cowboy didn’t normally believe in courtesy scratching when the other dog was picked up to be saved from a certain killing but finally tossed “Reno” back into the pit from the outside. “Reno” fell on his face then started towards “Bandito” who promptly headed in the other direction. After this match “Reno” was sold and retired to stud. To date, he has produced six champions and numerous other good dogs. At this time he still has a lot of young dogs on the ground and is likely he will end up with a couple more. He’s still alive and in good health but has not produced any pups in over a year. 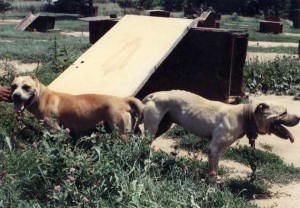