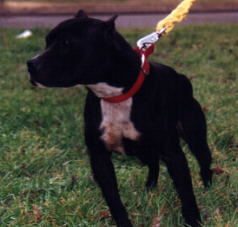 It was 1997 when I was invited by Hidden Hollow Kennels to attend their five dog show in North Carolina. I was interested in buying a good dog, so I felt this was the perfect opportunity to hopefully come across one. I decided to drive down and spend a few days in the Carolina Hills and thought this would be a perfect time to meet T. Garner and E. Faron, who I had become acquainted with over the last couple of years over the phone. It was after meeting E. Faron that I was introduced to a man who would later become one of my best friends, Billye Roberts. I met a few new people and even bought a couple of dogs, however I still wasn’t satisfied. A few days later I decided to hook up with Billye to see his yard. I asked Billye if he knew where I could find a good small male between 35-40 pounds. Billye thought for a minute and said, “Oh yes, there’s a dog down the street that’s killing everything in the neighborhood.” I said, “Lets go”, and off we were to see this dog. As we were driving up to the house, one black dog came into focus tied up on a chain in the back yard. Getting out of the car I said to Billye, “That is one Big Dog.” I asked the owner why he wanted to sell him, he stated that he was going to college and wouldn’t be able to care for him. Word travels quick in his neighborhood and before I knew it, several of his friends had come over trying to convince him not to sell this dog. I knew then I wanted to buy him. I was a little low on cash since buying two other dogs so I turned to my brother-in-law, who made the trip with me, and asked him if he was willing to invest in this dogs with me. The guy was only asking $600 for the dog and I couldn’t pass this opportunity up. We had met a couple of guys earlier that day and they were willing to loan us the cash. It turned out to be the best $600 dollars I’ve ever spent.

The day had come to see the show we had been invited to. The first match was Greasy Corner Kid’s Ch. Spanky and Garner’s Ch. Simba, winner Greasy Corner’s Ch. Spanky. After all the matches were over, we decided to see a couple of minutes out of this dog we had just purchased. Hidden Hollow Kennels had lost with their male and allowed us to bump into him for a few minutes. As I watch him go to work, I wasn’t extremely impressed as I shrugged him off as an average dog. My brother-in-law, however, saw something different, he said, “Eljaye, this dog is special.” After about 15 minutes we picked him up and headed back to Oklahoma. This black dog, whose name by the way is Nino, got a chain spot and sat on the yard untouched for a couple of months. One afternoon, a couple of friends of mine came by the yard and wanted to roll some dogs, I figured it was about time to see more of him. To make a short story even shorter, he stopped their dog in 15 minutes. I put him back on the chain for a couple more months. I later realized that Nino was turning 4 years old, I decided to see one more roll out of him as I was wanted to bring him out. I called up a very good friend of mine, who unfortunately passed away this year, and asked if he had anything for Nino. Again, to make it short, he killed his dog in 22 min, pushing 10 lbs. up hill. Nino was ready. I called out his weight at 46 1/2, a couple days later, Grinderman & Co. replied with a 2XW named Hall Boy. We set the date and joined a show hosted by SAGASA Kennels. We traveled to Arkansas and had two dogs going in that show, a bitch on Friday, and Nino on Saturday. It was show time, Saturday night, both dogs weighed in at 461/2, we washed them got in the box and released with Hall Boy on the head. It was even until Nino finds the chest. At the 27 minute mark, Hall Boy is picked up.

In the months to follow we healed Nino up and bred him to a couple of our bitches. We didn’t have any immediate intentions on bringing him out until Red Man Kennels called us wanting to hook into him with a dog named Bolo. We accepted the challenge and agreed on a weight of 45 pounds this time. My brother/partner worked Nino for me, while I was on the road. I have to admit, I was nervous since I hadn’t worked him myself. The match was only a few days away and I returned home for the match. Nino looked great and his weight was on the money. Once again, we weighed, washed and dropped in the pit. Both dogs hit hard in the middle with Nino again finding the chest and Bolo began to cur. Redman Kennels picked him up making Nino the winner in 6 min.

Nino was feeling good and we were looking for a Champion to go into. A month or so passed when we got word that we were allegedly dodging a dog called APK & Elliott’s Ch. Red Devil. A couple of phone calls and the match with Red Devil was set at 45 lbs. We traveled to Kansas joining the Rocky Ridge Convention. Nino again was conditioned by my brother and his team. Nino was right on 45 while the other dog came in a pound light. Once in the box, we released with Red Devil on the nose and Nino again finding the chest. Nino was on a down dog when Ch Red Devil is picked up declaring Nino the Champion in 18 minutes. Nino also won Best of Show.

After some time we were unable to get Ch Nino hooked up so I had decided to retire him. A few more months had passed when I received a call from Brickhouse Kennels. They had a 46 male called Ch Benny Blanco. We immediately jumped on the challenge and agreed to travel to their backyard and also let them choose the judge. I called Vietnam Kennels and asked them to send me their War Keep, they told me if I want to win, I’ll use it. I took their advice and Nino’s conditioning began. I worked Nino the first 4 weeks, when my job took me on the road again. I turned to my brother again for the remaining 4 weeks of Nino’s keep. I never doubted his ability to condition him nor his ability to follow the keep to very last detail. I knew Nino had to be ready and my brother was never available for my phone calls, instead his constant focus was on Nino.

I was completely at east until 12 days out from the match I got a phone call that Nino got 12 stitches in his leg from doing roadwork. The days began winding down and as the match date got closer, Nino was strongest at 45. We decided to give up a pound rather than bring him in sluggish. The match would take place in NY. I was already there when my brother, the team and Nino arrived a week prior to the show. It was a 23-hour trip and we wanted Nino to rest after travelling so far. As the show got closer, Nino began to Peak out. We were relaxing in the hotel room allowing Nino to roam freely out of his kennel one day before the show. Suddenly there was knock at the door, some friends from Wichita, Kansas had arrived, meanwhile Hidden Hollow Kennels staying in a room down the hall was walking his bitch who was matching on the same night as Nino. Nino shot out the open door and hit the 2XW in the hallway. After about a minute we got them apart. Neither dog was seriously injured instead, they were hungry for more. The day came and Nino was feeling good, another 45 minute drive to the location and we entered the spot where both dogs were weighed and washed. Blanco was dead on 46 and Nino as expected at 45. We released both dogs and before Nino really got out of the corner, Blanco caught him by the front leg, shook and popped a serious bleeder. Within the first 30 seconds Blanco snapped Nino’s ankle. I must admit, I began to worry a little and Nino began to peal him off by the nose. Nino and I both knew that he had to keep Blanco off of him or he could be seriously hurt. It was even for the first 40 minutes, however Nino showing to be the stronger dog. At 45 a turn is called on Nino, with Nino making a hard 3-legged scratch. By the hour mark, we made a handle and Blanco makes a hard scratch. Nino starts to take control of the match as he was biting hard on the head. At the 1:30 mark Nino began to make Blanco sing. I really began to cheer Nino on after 4 scratches each. At 1:48 Ch Blanco is picked up and makes a slow courtesy scratch. Champion Nino is declared the winner. Ch. Nino has proven to us his ability to finish a dog quickly, his intelligence to adapt to his opponent and his gameness in staying in it for the long haul without the use of Steroids. Nino’s road to victory has not been an easy journey. He’s had all odds against him, travelling, weight, environment and still came out the victor when no one but us believed he could. Nino is being retired due to complications with his leg injury. I would like to thank my team, my brother/partner Teddy, my brother-in-law E-Love. Vietnam Kennels, Black and Blue Kennels, Eric (my yard man) and most of all my wife and the Lord for making this possible.