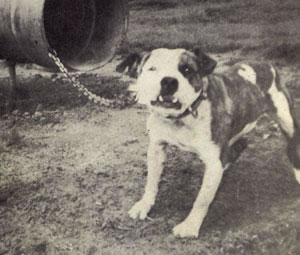 Texas’ first match was against Villarreal, which he won easily. His second match was into Mayo’s 4-time winner Plug. It went 1:15 and Plug didn’t make it in the end.

Third match was into Black Faul’s Diamond. For this fight I raised Texas’ weight up to 40 lbs. and this hurt him bad, because in the first 15 minutes Diamond never got off of his back but Texas steamed up and allowed the other dog some leeway. After being completely heat tested Texas keeps scratching after collapsing in his corner. Then Diamond doesn’t scratch after about a 35 count from referee Carroll.

For his 4th match we were against Carroll’s and C.P.’s Freight Train which was out of Night Train blood. My nephew had seen Freight Train in action and bet me a $100 bill that it would take Texas over an hour to win. Texas and I took that bet in 28 minutes. The weight was 39 lbs. this time. Texas’ next challenge would be the toughest of all. He would be facing a killer. A friend of mine had went to a show in Mississippi and got a report that if we wanted to see Texas fight again to come see this one because this would be his last.

It was his last till about 4 months and then he was hooked up again against Mr. Boyd and his red dog. By the way, the killer from Mississippi was picked up in 2 hours and 3 minutes. Texas is a dog that can be whipped but he’s 5 ˝ years old and his toughest challenge is yet to come! Texas is a GRAND ole dog and will be used as long as he keeps calling me from his chain.

now he is Ch Texas and Ch Joey is Gr Ch Joey.