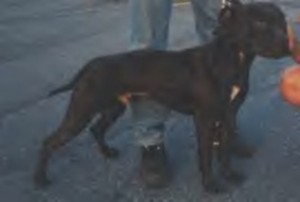 In April of ’92, PR Joe had a gyp named Gunny, off of Ch. Coco and a bitch named Sarah, who was a very promising prospect. He was looking to get a male to breed to her in the future and heard about a litter of pups out of Ch. Coco and a double daughter of Cates’ Nigerino, named Bathsheeba. Since PR Joe was pleased with Gunny and kept hearing good things about the Nigerino dogs, he decided he had to have a pup from this breeding.

He and his son drove out to the breeder’s house and spent several hours observing the pups before he finally decided which pup to bring home. Opie caught his eye, because he was very sure of himself and just sat and watched the rest of the pups like a male lion watching over his pride. They then drove home and let Opie out in the yard to play. He had such a good feeling about him, that he called the owner of Ch. Coco and told him he felt Opie was something special and knew Opie would be a steamroller.

The first time Opie was looked at was when he was 11 months old. In 2 minutes, Opie broke the other dog’s foot, at the ankle, and the roll was stopped after 5 minutes. Opie screamed and carried on in the corner like no other dog owned by PR Joe. PR Joe left very happy, Opie was started and he liked what he saw.

When Opie was 16 months old, PR Joe was looking for another roll for him and found out Props Up Kennel was looking to test a match dog they were considering purchasing. He agreed to leave Opie down for 15 minutes and they arranged to have a second dog ready to finish the test. However, a second dog wasn’t necessary, because Opie took the dog apart and stopped him in 15 minutes.

Four months later PR Joe decided it was time to find out if Opie was match quality, so he arranged to put him down with a dog that ws 19lbs. bigger than him. This dog went right to Opies’s head, near his left ear, and stayed there for 15 minutes, throwing Opie all over the place. The dog then took Opie right off his feet and slammed him on his back. At this point Opie reached up and bit the big dog hard in the throat. Shortly after, we handled the dogs and the other owner told me he thought his dog’s heart was no longer into the roll. He felt the bite to the throat had taken the fight out of him and he was right, the dog quit 2 minutes later.

The time had come to match Opie, so his partner Machiavelli hooked him into the Jersey Combine and their dog Charlie. Charlie was off of St. Benedict’s Raleigh and was reputed to be a very game dog. Machiavelli conditioned Opie and Mr. Bill did the handling. The match started and immediately Opie was back-peddling. He’d never done this before and he just didn’t seem to be himself. At about 15 minute mark, Charlie had a hold on the side of Opie’s head and was pushing him in a circle. Steve B. called a turn on Opie and Clamdigger, who was the referee, agreed. Opie wasn’t really turning, but regardless, the scratching was started and so was the beginning of the end for Charlie. A handle was made and in the corner Opie finally came to life. He scratched hard into Charlie, who reared up leaving his chest wide open and Opie took full advantage punishing Charlie severely. When he came out of there, Charlie looked as though he’d been blasted with a shotgun. It was pretty much all Opie after that, although at one point, Charlie did get into Opie’s stifle. Opie took him out by the muzzle and popped two cutters out of Charlie’s mouth in the process. Charlie was picked up game in :28 minutes.

Next, with some help from POW, Opie was hooked into the Duke Boys and their dog Flatliner. Machiavelli conditioned Opie and PR Joe handled him. This was the first time PR Joe handled in a match, so he was pretty much hyped-up. The dogs were released and Flatliner began working Opie’s front legs near the ankles. Opie didn’t appear to know what to do and the bets were flying from the Duke Boys’ side. Finally, Opie took him out by the face and the dogs stayed there for awhile. Opie then began to punish Flatliner’s chest and shoulders and the other side quieted considerably. The first handle was made at :20 and Flatliner came across fast. But now Opie was really cranked up and soon Flatliner was fading. At :43, after two hard scratches by Opie and a game stumbling scratch by Flatliner a handle was made. It was Flatliner’s turn to scratch and he took two steps out of his corner and fell forward onto his head. Flatliner never took his eyes off Opie and he continued to try to get up, but he couldn’t and he was counted out in :44. Opie was then tail scratched for his courtesy and he was obviously eager for more.

Opie’s third was into Rocketman and his dog Magic, who was out of Captain America’s Gr. Ch. King Arthur and Rocketman’s Go Go Girl. Magic had won one in over an hour and PR Joe and Machiavelli felt he would be a real challenge for Opie. Opie was sent to Machiavelli’s friend 1C to be conditioned and waited there ’til showtime. 10 weeks later, Joe headed north to meet Machiavelli and 1C. When the dogs were released, they met mouth to mouth and Joe was delighted because he knew what Opie could do to another dog’s mouth. They switched to swapping shoulder and shest holds, but it was obvious Opie was stronger and a harder biter. At :19 both dogs took a breather and a after a ten second out of hold count a handle was made. Magic made a good scratch, but Opie was really cranking now and Magic was taking a beating. Joe was standing over the dogs and heard Magic let out a whimper, so he started sending Opie in and he responded. Magic began singing, so everybody could hear and at :27 he took the count. Opie made a hard courtesy scratch. After the match Rocketman gave Opie a very good compliment saying “Opie beat a dog I thought was really good and made him look stupid in the process.”

In closing, Ch. Opie did whatever was asked of him and looked damn impressive doing it. His litter mate brother was Yankee Greg’s Deadend, who won one and lost his second time out in 3:01 to Captain America’s OO Buck.