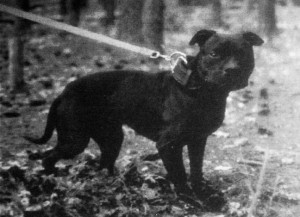 It was a hot day and we started a 10-mile run. To my amazement, Midnight was the only one that stayed right behind the truck the whole way, not allowing any dog to pass him up. If they tried, he would grab them and knock them down then continue to follow the truck. After seeing this beautiful black pup with all that stamina, I tried everything I could to acquire him and, luckily, I succeeded. Raising Midnight was an experience. By the time he was 8 months old, he must have caught and killed a couple of dozen cats, making him very unpopular with my neighbours since I lived in the city. At 8 months old, I rolled him with a 3-time winner I had by the name of Halfdead (Bullet), and he started right up. About a month later, I rolled him with a dog a friend had called Spike who was a very tough dog. For 15, they swapped everything and at the end, Midnight scratched hard. At 9 months, I decided to do Midnight against Pocono’s Bruce. Midnight weighed 39 lbs. and Bruce was 38 lbs. This was a good fight for Midnight as he learned a few things from Bruce. Midnight stopped him at 40. I decided to match him against a dog that Havana Chico and T. Russo owned together by the name of Groucho, who was said to be a game dog. We signed at 38 pounds. This fight started with Groucho fighting the head and Midnight on the chest. Groucho tried but could not hold Midnight out. By 30, Midnight was working on a down dog; with no chance of winning, Chico picked up Groucho and gave a very game scratch, making Midnight the winner in 42. A couple of months later while talking to Indian Sonny and telling him that I doubted the quality of Midnight’s opponents, he told me that he had a littermate brother to Midnight that would bite his head off, meaning to me that he liked him.

I decided to go to California. When we rolled Midnight and Clancy (later known as Abraham’s Headache),

Midnight got right into his chest not giving him a chance to do much of anything and in 35 to 40, Clancy gave

a very, very game scratch, convincing me of Midnight’s quality. The second match I went into Bob Pitt’s

lxw Leroy at 38 lbs. Leroy was a matured dog weighing in at 38 lbs., also defeating a good dog, Ashton’s

Icepick, in 1:48. Midnight was a young dog (13 months old) weighing in at 37lbs. This was one of Midnight’s better fights. Both dogs meeting hard in the center of the pit. Midnight would go in Leroy’s chest and drive him across the pit, slamming him against the wall and punishing him hard. But Leroy would just hang in there, nothing really working against Midnight’s style of fighting. At 1:20, Bob finally picked Leroy up, making Midnight the winner.

After this win it was pretty hard finding another 38 lb. dog for Midnight, but while visiting a friend down

south, I met a couple of guys from Georgia named Dobbins and Robertson. They had a 38 lb. dog by the name of Panda Bear and we were on in 8 weeks. On fight day, both dogs were on weight and when we released them, they both grabbed chest holds. As Midnight tried to work his hold, Panda shook him out and Midnight lost his hold. Many people there saw this and started betting against Midnight, but it only lasted a few minutes as Midnight got his hold and never looked back, making Dobbins and Robertson pick Panda Bear up in :30, also making a game scratch. While speaking to another good friend of mine, V. Camp, he told me that he had a 39 lb. dog that he would like to try against Midnight. We set Midnight down against Camp’s Joey Boots. Midnight came out storming and after 20 min, I told Camp if he would like to scratch to continue, which he accepted, and Joey came across with Midnight biting him hard in the center. At this point, Joey was taking a pounding, so Camp picked him up at 29 min. and Joey would not courtesy scratch. Midnight courtesy scratched like always. Bandwagon’s CH Rusty Hooks was sired by Jerry Matlocks CH Truck, a pure Corvino dog. He was whelped by Bandwagon’s Kay. Kay was a Gr. CH. Boomerang bitch. Rusty had defeated the best dogs in the Mid-West. At the time Ch. Midnight had defeated some of the best dogs on the East Coast. Included in these wins were the Havana Boy’s, Bob Pitts and a Vinnie Champion dog. Getting him a GR CH match was almost impossible in the North East. I had heard of Rusty and they had heard of Midnight, and before long I received a call from Bandwagon. Let me say this man and his dogs had some reputation. We agreed to 39lbs and it would be in my part of the country. Now the conditioning begins! I decided on a two week pre-keep. We were going to work hard. My instincts told me I needed it because I chose an eight week keep consisting of spring pole work, swimming, hand walking 15 miles a day and peaking out at two hours on the slat mill. Midnight was a workaholic. I had to be careful and not let him over work himself because he would. 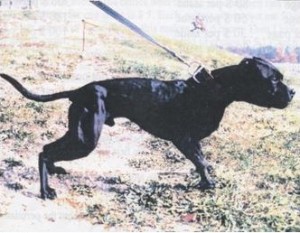 The day of the show I chose Havana Chico as my second, he’s a great dog man and has an exceptional eye.

Most importantly I knew he would be there for me ‘til the end. Everyone with the exception of a few friends

was betting on Rusty to win and I covered as many bets as I could. The dogs were released and immediately they swapped shoulder holds. At twenty minutes I called a turn and a handle was made. To my surprise when I got Midnight in my corner I realized he had lost his front end. My corner man gave me the encouragement I needed and then Rusty came hard. We took turns scratching for about an hour. Rusty was destroying my dogs’ front end. He was without a doubt the hardest biting dog I had seen in twenty years. All I could do was stay with Midnight and try to get him from the bottom and to his feet. We were fighting on defence. At the one and a half hour mark Midnight got to his feet and drove Rusty to the pit wall digging in his throat. How we were on offence. It was the first time we saw weakness in our opponent. Midnight

was scratching across the pit at full speed bouncing off his front end. Full blast!! After a few scratches into his chest Rusty finally slowed down. At one hour and fifty minutes Rusty took the count. I asked for a courtesy and Midnight scratched just as hard as his first only bouncing off his chest. These two fine athletes had to meet and only one could be the winner. Thank God it was me. I will always thank Bandwagon for their courtesy, good manners and making a good show! I would like to thank Indian Sonny for allowing me to own a truly great dog.