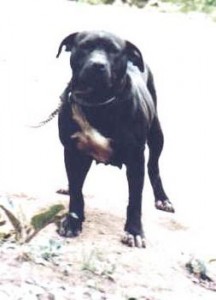 It all started back in 1979 when I had just become friends with a guy named Dennis R. He had a brother

to Ch Tonka, Ch Crash, from the Tombstone x Red Baby litter. He also had some sons of the Four Bits
dog which later turned out to be sons of the great Bolio dog instead. After seeing some of his dogs go
I decided I wanted some of this blood. Soon after he asked me if I wanted to ride out to Patricks with him.
It’s a long way to drive from Oregon but I wanted to go so I filled my pockets with all the extra money I had and away we went.

After looking over the yard Pat said he had a one eyed bitch named Slick that I might like. She was sired by Chen Leng x Patrick’s Tuffy, later I found out she was sired by Bolio and was a sister to Bull Boy Bob & Ch Dagon. I was glad to say the least that I had a daughter of Bolio. At this time Pat had a couple of dogs he wanted Dennis to match for him, one was Commander Whitehead he was 7/8ths Boilo. When we got home Dennis found a match for him and he won in 54 over Willie’s Little Man. During the keep on Commander
Whitehead my Slick bitch came into heat & we bred the two of them together (without Patricks permission).
Well Slick had 10 pups 2 died because she layed on them so there were 8 left, I gave 2 to Dennis for the breeding. One was a bitch that looked just like her grandmother Patrick’s Tuffy so he called her Tuffy after her grandma. He kept the pup until one day I came over with a friend that really liked the Tuffy pup & he bought her from Dennis. I told my friend if he ever wanted to get rid of the pup I would like to buy her.
There came a time when he was out of work and needed to pay the rent. He knew someone that wanted to buy a 2 year old bitch I had so I traded him the bitch for Tuffy. She was now about 4 months old. I put her on a running cable by the house. She was one of those pups that wants to get anything that moves. I remember one day my land lord was coming up the hill on his tractor tractor he got too close to Tuffy. She locked on to the front tire and all he could do was back up slowly until she lost her grip. He never drove the tractor close to her again. When Tuffy was old enough we rolled her into a match bitch that she stopped in 20. Then I rolled her on a bitch I had that was bigger than her, she did a lot of damage to the bigger bitch so I wanted to match her. Because I’m in a wheelchair from a auto accident I had to get someone to help
condition & handle her so I called my good friend G. Crum and I told him I had a 32 lb. bitch open to match. He told me he would help out so I took him the dog. We found a bitch that was open at that weight she was the 5xw Lee’s Jap. This bitch had won in 4 different states, she was a hard mouthed front end dog. The match was made and we got Tuffy ready. The day of the match came and Tuffy weighed in at 30,5 lbs. Jap came in at 32,5 lbs. The owner of Jap being the nice guy he is told me the difference of two lbs. was too much for Tuffy to over come. I thought it over and decided to go for it. Jap had Tuffy on 3 legs at 20 then Tuffy did what I knew she would do, she got Jap by the nose. Tuffy stayed on her nose the rest of the fight. Jap was trying hard to stay in the match but Tuffy was punishing her severely. Time passed and we were now at the 4 hr. mark. There were no turns, no out of holds at this point. A spectator knocked a breaking stick in the pit. Tuffy looked to see what it was and a turn was called on her. When she was
handled she ran her scratch. Then it was Japs turn to go when handled she collapsed in her corner. Now all Tuffy had to do was scratch to win, which she did and was declared the winner at 4:24 and history was made that day. This was the longest match for females ever. Everone said she wouldn’t make
it but she did and after she healed up I put her back on her run. I’ll never forget the day that my mom went out to feed Tuffy, she came running back to the house and said Tuffy was gone. I knew if she got out
of the yard she was probably in trouble because I live in town so I called the local police to see if they had found a loose dog, sure enough they had. Apparently she had found a cage full of rabbits. The cage was off the ground high enough that she couldn’t reach them but she was screaming and jumping at the cage and the noise woke the owner of the rabbits and he called the police. When I went to get her the policeman said she was determined to have rabbit for dinner, as he was taking her to his car she was screaming to get back to the rabbits.

I retired Tuffy to the brood pen but she never had many pups that lived for one reason or another. I did breed her to the Chinaman dog and produced my Bounty Hunter dog. He won gamest in show with one of those hair raising scratches. His sister was Vince’s China Girl, she was the dam of Garner’s Frisco a grandson of Tuffy and Garner’s main stud dog. She was bred a few more times but almost no dogs are left. I did breed her back to her littermate brother Mayfield’s Bonz, but Tuffy died 3 days after giving birth so I hand raised 3 of these pups. I would also like to add that out of 8 Tuffy pups 6 of them proved to be game. More should have been matched but for one reason or another they never were but they were tried hard many times.