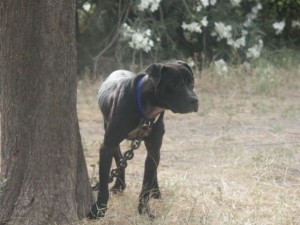 This is a story about a little black 36-38 lb ace by the name of Sweet Pea. He never had to go over the 45 min mark, shutting his oppents down in short order. Sweet Pea was whelped in September of 1998. He is out of Clemmons’ Dick and Fat Bill’s Ripper. Ripper had produced such good dogs as Tri Valleys Bree, CH Arangadanga, Wicked and other good dogs and these dogs in turn produced well. So when Fat Bill told me of the breeding I told him I had to have one. Once I received the pup I told Fat Bill to name his price because I knew he was going to be something special. It was the best investment I ever made. Although his name implies it, his demeanour has always been anything but sweet. He is one of those animals that is so high strung that you have to be careful at all times, especially when working him!! He’s not mean, just overly excited to do what he was bred to do. Now that he is retired I would love to make him my house dog, but that is just not feasible wtih this animal. Through the schooloing process Sweet Pea showed to be really rough and intense. We were tired of him wrecking our own stuff so we opened him up. For his first we were hooked into C. Clark (breeder of GR CH Mammy) and his partner at the time Ragtime. Their dog was a 1xw over the well known S&W&P. We were hooked at 36lbs. At weigh in they tell us they didn’t bring their 1xw something happened. No matter we hook weights not dogs. Dogs meet in the middle as Scratch n Stitch do the honors in the middle. Their dog was a Bolio bred dog by the name of Rascal. Rascal tries to barnstorm Sweet Pea but he just dont have the mouth to keep up. Sweet Pea is really taking it to Rascal’s shoulders and Rascal starts to fade fast. At about the 30 min mark Sweet Pea is dragging Rascal around the pit and they pick up at 35 min. Rascal does make a flopping game courtesy. After the match C. Clark says his 1xw will be ready soon. After a couple of weeks I call Mr. Clark about his 1xw and he states he will pass on the offer, I guess he realized the error in his ways. For our second we were hooked into Pepper Box Kennels out of Colorado. We were to travel to N.M. and get it on at Rowdy Kennels. It was a three card show with us hooked with two into Pepper Box and Rowdy Kennels hooked into Stickboy. All good dogmen and more importantly good friends and sportsmen. Once again we are hooked at 36lbs. Pepper Box has a 1xw over Stickboy (I believe) by the name of Goldberg. In the middle this time is Stickboy. Dogs meet in the middle and its fairly lopsided from the word release. Sweet Pea staying in the shoulders and doing some real damage. Goldberg is trying but he’s over matched. Just like the first Sweet Pea is now dragging a down dog around the pit. Pepper Box picks up and Goldberg is a done dog. He cant stand to even try to courtesy.

For our third we hooked into a 2xw from S.S./ CNN’s by the name of Junior. Junior is a Turtlebuster/Chinaman cross bred by the AZ Kid. Junior showed to be a rough dog and actually beat us one time before. We hooked at 38lbs with Bernardo in the middle. I was a little nervous going into this one because we were coming up 2 lbs. To meet them. However, I figured with our mouth the extra weight and strength could only help us. On release dogs swap shoulders and neither is giving an inch. It became very obvious that the extra weight indeed helped us, as we were doing a lot of damage and doing it early. Sweet Pea begins to really poor it on and Junior begins to fade fast. He is now a down dog and Sweet Pea stays pouring it on in the shoulders. They to decide to pick up and Junior just goes limp in the corner at the 30 min mark unable to courtesy. For our fourth we hooked into the AZ Kid and DS and their Seal dog. This was a grudge match as AZ Kid was spouting off his mouth that Sweet Pea only beat Junior because they messed up their keep and that he wasn’t all that. Also he was making absurd claims about his Turtlebuster dogs being the roughest dogs on the west coast. This all coming from a man that had 1 win and 4 losses in his last 5 shows. Mr S is a class act and one of my best friends in the dogs I hated to see him get stuck in the middle but they were partners on the dog. Showtime comes and we weigh a pound under. Seal comes in 1&¾ over. No forfeit was takin or odds given, I was just ready to put an end to all the talk and let the dogs settle it. Bernardo once again does the honors in the middle. The weight advantage made it a uphill battle but I knew Sweet Pea would prevail. Dogs are released and are going at it. Dogs are swapping shoulders and Sweet Pea occasionally dives to the back end. Seal turns early and completes his scratch . Seal starts to look flustered and can’t keep up the pace. He starts snapping at Sweet Pea’s face. This doesn’t deter Sweet Pea and continues to work Seal over. Another handle is made and Sweet Pea plants Seal in his corner. At 42min. Seal to complete his second and he don’t. All talking has now been put in its place. For the fifth we are hooked into High Plains Kennels and their dog is named Number 5. Very ironic isn’t it? They come from the TX/NM border and this is the one that we cant beat. High Plains is known for having rough dogs and the talk is Sweet Pea is gonna finally meet a dog rougher than him. We travel to N.M. once again and are part of a four card show. This was a very nice show with well known dog men from all around including PD, WS, Over the Top Kennels, and a host of others. We are hooked at 38 and Bob A. does the honors in the middle. Dogs are released and swap shoulder holds. Number 5 is strong and rough and gets in our chest for the next 5-8 min. Sweet Pea doesn’t panic and does something he never has done. He shoots to the back end and stays there. It was as if he knew he had to slow this boy down. Sweet Pea hunkers down in the ass end and stays busy. He occasionally will work a shoulder but then goes right back to the ass end. Number 5 begins to tire and just cant keep up the pace Sweet Pea is setting. Number 5 begins to come out of hold and work less and less, he is beginning to meet that inevitable fate. At this point High Plains sees the writing on the wall and picks up his Number 5 dog in a mere 27 min. We were very proud to win in such dominating fashion over a such a respectable kennel.

Sweet Pea has now moved onto the second stage of his career, producing. We only started breeding him after his 3rd and his oldest litter is now 19 months and we are very pleased so far. We have bred him exclusively on our yard to our Ed Crenshaw dogs we got from our good friend PD. We will be breeding him to some good Eli bitches as they come in heat. Only time will tell if he succeeds in producing. I’ll be happy if he produces dogs as half as good as he is. I would like to end this with a few thoughts and thanks. First I would like to thank my partners, Cactus Patch, and Powder. I couldn’t ask for any better partners to travel with and they are a huge reason why we have the success we have. I would also like to thank Fat Bill and PD for their guidance, friendship, and the first class dogs the have entrusted to me. Lastly, to the greenhorns and newcomers, stay motivated and do your homework. Get your dogs from people that actually do their dogs and win a high percentage. With success comes jealousy and envy and don’t get caught up in the B.S.!! You’ll find that the people that talk the most actually do the least, and cant talk about anything they have done so they bad mouth others instead. Or worse, they talk about dogs they never have seen. These people aren’t dogmen they’re bullshitters!!Learn to differentiate the two.