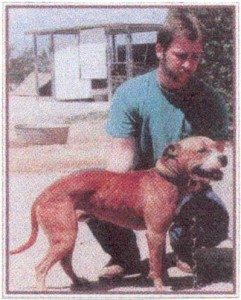 This is a story about a dog that many people consider an ace! Yes a legend in his own time. Viewed by many as the best thirty-four pound male that ever lived. Many of us are still looking for that once in a lifetime ace. Bobby has been fortunate enough to’have had more than one in his lifetime! Bobby has owned the likes of Register of Merit Ruben, Champion Did Billy who is also a ROM along with Champion Tusk, Champion Tootsie Roll, Champion Fox, Champion Campesino and many other ace dogs. Out of all these the one closest to his heart is Grand Champion Badger.Grand Champion Badger is out of the very famous Smith and Waltons Ruben and WilliamsMija litter, this was a tremendous litter of dogs. This breeding produced Champion Fox, Grand Champion Badger and the fabulous Taylor dog. Taylor was famous for his contest with Champion Bullshit, a contest that Taylor proved to be dead game. Ruben was a double grandson of Hyde’s Satch and Bloody Sunday, the Mija bitch was a Hienzl/Carver cross, she was sired by the dead game Hienzl’s Bummy. Well, enough said about these other dogs, I’ll get on with the story of BadgerBadger’s first contest was into the School Boys who were using a good one from a -Hammonds/Patrick cross-named Ronnie. This was a very good show as both dogs swapped it out with all :hey had in the stifle. Soon it was evident with all that were there, that Badger was pulling ahead with his hard mouth. The School Boys had to pick Ronnie up at fifty-three minutes as Badger was just to rough for him to handle and minutes later it proved to be fatal for Ronnie.Diamond P’s Waylon was Badger’s victim for number two and this proved to be an extremely lopsided match. Badger dominated Waylon from start to finish, He worked the backend and the front end. In others worked he would-grab anything he could get to that looked good. Waylon’s owner conceded at the thirty-five minute in an attempted to save him and Waylon proved to be the second dead game dog that Badger had faced.Championship was the goal of Bobby on this outing and wanted nothing, but to go into another first class unbeatable dog his name was Cox and Peek’s Bloody Billy. Billy was also a two-time winner and in the words of the dogmen in Mississippi, Badger did not have a chance. Billy was also bred down from Hyde’s Satch and Bob Cox was never easy to beat. The night these two met was a show to be remembered, it took place at a very active spot as there was seven other contests taking place making this quite some convention. Badger worked Billy’s backend with everything he had going right through him and winning his Championship in 52 minutes. Bob Cox later approached Bobby Smith that night and said he was embarrassed as the way the match turned out. Later that night the judges of the eight-match show came to the decision that Champion Badger won best in show. At this show there were many good ones going including Sorrell’s Champion Uncle Bud, but let me stress that when the votes were being totaled There was no doubt in the judges mind who was to take the coveted trophy for best in show, Champion Badger.Champion Badger’s fourth match was against Benson’s Dancing Fox from a Patrick/Benson bloodline. This was Badger’s shortest outing lasting only three minutes. Champion Badger severed a femoral artery immediately and was going down last. Benson showed great sportsmanship by picking up Fox at three minutes, the judge for this event was the author, of three books on our dogs and said that Champion Badger was one of the best dogs he had ever seen. He told me this when I interviewed him recently for THE TIMES he also said that Badger was the roughest, most punishing and hard biting dog that he had the, pleasure of seeing. To me, that was an impressive statement to make!Champion Badger’s fifth fight for his Grand Championship was against Mr. Nice Gay and Mad Mike’s Billy Balls. At this show there was a bitch in heat at the sight and the scent was rampant to the dogs. This is the reason for the way Champion Badger acted the first forty minutes, as he humped the air, but Badger got tired of being bit and started doing what he was famous for! Champion Badger got on Billy’s stifle and just started eating away. Billy Balls was a Chris Wilkerson bred dog; sired by Wilkerson’s Clainy out of Wilkerson’s Tipsy. Well once Champion Badger got started there was no stopping him and Billy Balls was history. They picked him up at 1:22 to save him, Billy Balls made a good courtesy scratch! With this fifth win Badger became an official Grand Champion!!!Grand Champion Badger has also proved to be quite a good stud as he has already produced one champion. This Champion is known as Champion Guantes. He also has one two time winner and numerous one-time winners. He was sold to some fanciers in Ireland who plan on breeding him quite extensively. Shortly before Bobby sent the dog to Dublin he took him to a sperm bank and has got enough sperm for twenty-five litters ofpups.In summation without the proper dog man behind him Grand Champion Badger might not have become a famous dog. All the credit for Grand Champion Badger and his littermates should go to Bobby and his partner Willis, for without their foresight to make this breeding we would never have known a dog named Grand Champion Badger.A article which appeared in the Game Dog magazine.

Daly’s (Smith & Walton’s)GR. CH. BADGER R.O.M. E.P.T.L. Williams of California bred “BADGER” in 1983. He won 5 matches at 34 to 35 lbs and had a name for being one of the best at his weight in the USA. He was three quarter Ronnie Hyde (Carver) bloodline and one quarter Howard Heinzl bloodline.In his litter there were other well-known dogs, such as William’s “TAYLOR”, a brindle 1 x winner, 1 x loser. He lost in a great battle with Steve’s CH. “BULLSHIT”. Another brother was Smith & William’s CH “FOX”, a brindle 3 x winner at 39 lbs. A sister was William’s “LUMPY”, a 1 x winner at 34 lbs, a red and white bitch that looked like “BADGER”. Also a 1 x looser was Padilla’s “MOLLY”, who proved to be very game. “BADGER” produced three Champions in the USA, Crazy Canuct’s CH. “JUANTEZ”, L.A. Dream Team’s CH. “LITTLE HEN” and Power House Kennel’s CH. “LARGE MARGE”. Some others produced in the USA are Smith & Walton’s “WHITTER”, a 1 x winner. Smith & Walton’s “JOSIE”, a 1 x winner. Smith & Walton’s “BLAKE”, a 2 x winner. Buffalo’s “OZZIE” a 2 x winner.“BADGER” came to Ireland and got himself a new owner in the way of Bo Daly. He retired “BADGER” as a stud dog. Here are some dogs that won in Ireland and England; Nailer’s CH. “BOB”, a black 4 x winner, 2 x looser. K&K’s “JESSE”, a 1 x winner, red and white female at 311bs. Ricky B’s “TIMBER”, a 1 x winner, red 45 1/2 lbs. Codd & Quinn’s “RADAR”, a 1 x winner and 1 x looser, red 48 lbs. T. Jordan’s “PARVO”, a 1 x winner and 1 x looser, red 34 lbs. Others that lost that were sired by “BADGER” proved very game and some did not; G.O.B.’s “CHERRY” 1 x looser female. K&K’s “FERRET”, a 1 x looser, red female at 32lbs. Sloane’s “TOKER”, a 1 x looser male at 35 1/2 lbs. Nailers “BLOSSOM” a 1 x looser, black female lost to GR. CH. “JENNY”. Byrne’s “GREMLIN”, a 2 x looser at 31 lbs lost and proved very game to CH. “CULCHIE”.Nailer’s CH. “BOB” was bred to R.F.C.’s (K&K’s) FERRET, and produced the dog known as “GIMP”, a 32 lb. dog, who lost his first match, but returned to defeat the same dog at a later date. He won 2 matches in total. His brother R.F.C.’s “SOCKS” beat two dogs, one in Ireland and the other in England. Another brother R.F.C.’s “JOHNJOE” won one match and lost one match. The “GIMP” dog was bred to Miley’s “LOU”, a sister to R.F.C.’s GR. CH. “JENNY”, to produce a deep game dog called R-F-C.’s “TYSON”, who defeated the well known dog, Jordan’s “VINCENT”, in 2 hours and 49 minutes. “TYSON” went on to produce R.F.C.’s “NORMAN”, who defeated Ricky B & McCallum’s “RINGO”Codd’s “ZULU” a brother to “NORMAN” is still alive and at stud. GR. CH. “BADGER” appears 5 times, up close on his pedigree.Another son of GR. CH. “BADGER” called Elwood’s “BARNEY” (a brother to Nailers “BOB”) was bred into the Farmer Boy’s strain, in one litter to Farmer Boy’s “ONE EYED FLOSSY”. They produced Farmer Boy’s “BLACK SPIDER”, a 1 x winner and 1 x looser black dog at 42 lbs, Farmer Boy’s “BLACK TARA” a black 33 lb female, and Ricky B’s CH. “CULCHIE” a black 30 – 31 lb female who won three matches and lost one at 32 1/2 lbs, which was too much weight to give away.CH. “CULCHIE” was bred to Farmer Boy’s CH. “SKATEBOARD” to produce three males, two of which won some matches. Farmer Boy’s “SEANSEAN” was a 1 x winner at 33 lbs, and Bulldog Sanctuary & Belfast Boy’s “HAGLER” who killed his opponent in less than 30 minutes. And in another great match he proved to be deep game against R.F.C.’s “JABBS” a son of CH. “CURSTOPPER”.In the GAME DOG, there was talk of the mating between GR. CH. “BADGER” and GR. CH. “SHELLY”, I forgot how many pups were born, but there was doubt as to “BADGER” siring the litter as one of the pups was hairy like a Lurcher. None of the pups turned out good or were bred from. “BADGER” was bred ten times. He never sired many pups and didn’t have a huge impact on the dogs of Ireland, but there are dogs like CH. “CULCHIE”, Codd’s “ZULU” and others that will keep his blood in the country. 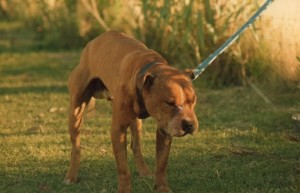