Elmo was sent to a person as a gift. He arrived up here as a 15 month old never touched dog. He won into very good comp up this way said partners hands in 37 minutes. He never got BIS either, should have yes, but it was given to the person that hosted the shows that night, even though the dog he showed Skinner had gone into a dog named Disco that was a piece of crap. Elmo had stopped the Disco dog in 17 minutes off the chain pushing over 5 pounds before Disco ever met Skinner. Skinner beat the Disco dog at their actual true weights but it took him just over 20. Skinner was a foul fighter, nothing more. He later went on to go into the Blackjack dog that Shaw had, and it was an easy spot for Shaw to pick. The Skinner dog only got BIS the night Elmo was shown because the show was put on by Skinners owner, and because most knew that he was looking to go into Blackjack next. Many said to the handler of Elmo that he deserved BIS, so did many others, but that’s life. Elmo could have easily have been championed out, but some personal issues at that time between myself and a partner got in the way of that happening. It was unfortunate, but those things happen. 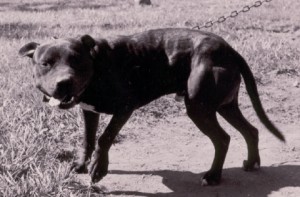 We both look back at that time now with some regrets, but the partnership and friendship has been able to be salvaged as a result. Elmo was eventually sent back to Tom as a proven stud dog, and Tom replaced him with his belly brother who lived with me for about 3 years and was bred 3 times during that time. He’s now down on my partners yard where he will see more breeding in the years to come. He appears at this time to throw more mouth into his offspring then Elmo did. Although we believe that Elmo’s brother appears to throw more mouth into his offspring, we are also aware that Elmo was the far more talented dog of the two. Elmo didn’t win that night as a result of mouth. He won by pure talent. He never had the opportunity to show his mouth, as his opponenet never stuck there long enough. There was only one scratch by the other dog before he packed it in, and had a handle not been able to be had on the other dog, he would have quit much sooner. Many said it would take one hell of a dog just to stick with Elmo. What Tom has back on his yard is a 1 in 100 dog. He throws talent into his offspring plain and simple. He’s proven to produce with cold dogs, and dogs that are less than average, so I’m quite sure for those who want exceptional dogs, they will have no problems finding many winners in the years to come that are off of Elmo bred to bitches off of Tom’s yard. Elmo has also thrown the longest Frisco bred show dog to date. The Minnie Mo dog that recently went 3:08, but due to a handling choice that we agree now was in error it could have gone longer (closer to 3 1/2 to 4 hrs.). Both Mo and his opponent where tremendous specimens in exceptional dogmens hands.