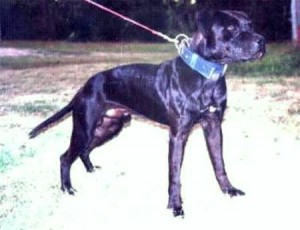 In March of 1995 a young black male dog called “Tex” was brought to MAD’s yard. The dog was owned by Smokey of Texas and was obtained from Chicago Mike by buying a pregnant bitch that had been bred to Well’s Ch. Oscar.Tex was your typical Eli, Jr./ Bullyson bred looking dog. His body was long, muscular and big headed. He had big cutters to match.When Tex turned 14 months old, Smokey was concerned if the dog would even start. So, MAD agreed to help school the young dog. At the time Dead Serious was looking for match dogs and MAD had a proven one-time winner the size of Tex for sale. After only :15 mins, he had killed his first opponent at an early age. The first :08 minutes Tex buried deep in the shoulders, teeth sunk to the gums. For the remaining :07 minutes, he laid deep inside the kidney area until the one-time winner layed dead. Dead Serious was convinced and bought Tex from Smokey and changed his name to better suit him. “El Diablo Negro”, which translates to “The Black Devil”.Diablo was later rolled about 6 or 7 times in their yard with none of his rolls going over 8 minutes without being stopped.After witnessing Diablo roll, their friend Mr. Woods told them something that molded their philosophy. He said, “Son, put that black dog into shape and I’ll find you a roll to see how game he is. You bring the dog and I’ll bet the money! If you still don’t know what to do after that, let him heal up and put him back into shape again. I’ll find you a roll, bet the money and you bring Diablo!!” Well, needless to say, they found the roll and they bet the money.For Diablo’s first match, we were hooked up into Aries Kennels at 47 lbs. At this time, Diablo was twenty months old and was headed south of the border to their backyard, Mexico.On the morning of the show, Diablo weighed in at 51 lbs, some 4 lbs overweight. But, by 9:00 PM that night, after being walked, rubbed and emptied, Diablo made weight which was somewhat hard on him. The show was definitely still on!! 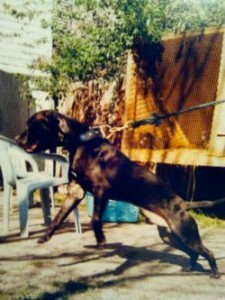 Upon arriving on location we discovered that Aries Kennels had gone out and borrowed another kennel’s dog. The dog was Espy’s Joker, a two-time winner and a two-time best of show. Diablo dominated the Joker dog from start to finish and by the :33 minute mark Joker sat the line.For Diablo’s second match some 5 months after his first win, they was hooked into Norman K.’s Drexal, him also being a two-time winner and a truly deep-game bulldog. Only this time they traveled east to “Cajun Country” Louisianna with Diablo now being 25 months old.this match was being used as a measurement of where they stood with Diablo. Being matched into Mr. K., a legend and one of, if not the most well respected and honored people in the game, truly made it an honor.Drexal was to be Diablo’s toughest and longest match to becoming a champion. Had Drexal not met up with Diablo, he would have had a long and more promising career in the game. The box was 16′ by 16′, but it could have been 10′ by 10′ and neither dog would have touched the walls. It was truly a classic match “Southern Style” with Diablo’s speed and extremely hard mouth rapidly becoming the deciding factors. Finally, at the :38 minute mark, Drexal was picked up and brought to his corner for courtesy scratch. Upon Drexal’s release he had fallen a total of three times catching himslef with his muzzle until finally lunging and taking hold of Diablo to complete a scratch that proved him to be dead game. After an hout of work on Drexal, he couldn’t be saved, but will always be remebered as a truly dead game bulldog.Soon after that match, Diablo was hooked into Pete the Greek & Moe’s Ch. Brazra, a four-time winner at 47 lbs. A forfeit was paid to Ch. Brazra because Diablo could no longer make that weight and the fight would never go off.Diablo was matched for his championship about 8 months later and at 33 months of age. It was agreed that this match needed to be an against all odds type of match for the two-time winner. So to confirm everything, DSK felt he was capable of doing and more, so they headed north. This time, traveling to their opponent’s back yard once more, over 1500 miles from home to the “Big Apple”, New York City, “where all lanes are fast”.The match was set at 48 lbs, into the Gator Boyz and their dog Dunga. After tow hours of waiting past the scheduled time of the show, Dunga arrives. He weighed in at a conditioned 49 1/2 lbs. and with Diablo being on weight. Diablo being 1500 miles from his home in Texas now had to push an additional pound and a half. Just one more odd to go against. Once the dogs were released, Diablo took control, but at the :03 minute mark Dunga had the tip of Diablo’s muzzle and had suddenly torn Diablo’s nose from the bone which had him breathing through the mouth. The odds were again stacked higher, but after :21 minutes of being dominated, Dunga shut it down with this turning out to be Diablo’s easiest victory of his career.Afterwards, El Diablo Negro was retired to stud.