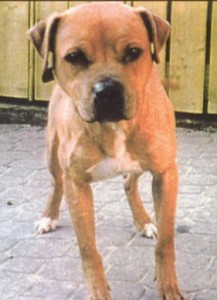 How Champion Justice came about. I was looking to by a bitch from proven winners and possibly a winner herself. I heard STP Kennels had some dogs for sale so I then purchased STP’s Ch. BB. She was off of Gr.Ch. Buck bred to Ch. Bonnie. When I got her home it did not take long before she came into her heat cycle so I could go ahead with my plans to breed her to my 2x winner Boomer who was out of STP’s Miss Rage bred to STP’s Ch. Black Pazmanian. The Sire of Champion Justice was a full belly mate brother to the Ch. Black Pazmanian Jr. dog. When Justice was around two years old I decided to give him a good roll, he showed good in his roll and I then put his weight out at 41 pounds and the Can-Am boys picked the weight up. I got wind of the word going around that Justice was not going to make it past the 20 minute as the Can-Am boys were bringing a hard-driving, biting stifle and should dog. Once the Ref said “release your dogs” Hondo the Can-Am boy’s dog went straight for the Stifle and was working it until Justice picked him off by the nose and it turned out Justice was biting just as hard putting bleeder’s into Hondo’s mouth and snout. The show went to the 1:07 mark and Justice was declared a 1x winner that evening screaming in the corner for more. Justice’s second match was into a dog named Pushrod that came from Rollbar Kennels handled by Red. The weight was set at 42 pounds. Pushrod was the dog that was to end Justice’s career. As it turned out it ended up a real good fight but it was not Justice whose career was ended. As said it turned out to be a hell of a Dog Fight, both dogs biting hard maneuvering to get the upper hand. The first turn was called around the 1:35 mark into the fight. This should give the readers an idea of what kind of fight this was. Around the 1:45 mark Pushrod started to fade fast and both dogs were still scratching hard. I knew Pushrod was dying and I suggested they pick Pushrod up to try and save him, but they wanted nothing to do with it. As the fight went with Pushrod doing some game scratches they decide to pick up at 2:22 with Pushrod doing a deadgame courtesy scratch. All the while Justice was still screaming in his corner for more action. It is too bad Pushrod died moments after the scratch because they lost a great dog and I wish I had owned him. This was number two for Justice.

I put Justice’s weight out again and it took almost a year and half to get him hooked. I tried hooking Justice into a Champion or Grand Champion but it did not end up this way. My friend The Cuban Cowboy gave me a call saying there is a dog in Florida nobody wants to fight named Eli a three time winner at 41 ½ pounds. I took the fight and we met half way. This fight ended up to be pretty good also, with Eli working the face and Justice working the bottom jaw, front end and legs. The fight ended with Eli taking the count at 2:08, and once again Justice is screaming for more. Giving Justice the new title Champion Justice. In closing I would like to say: A lot of people thought Champion Justice wasn’t able to bite hard but I always told them “Don’t let his times fool you, ask people who know me as I always look for the best opponents and dogs with some sort of reputation”. Champion Justice does have some winners on the ground now and it looks like he is going to be able to produce well.
Yours in Sport
Shawn B.
http://www.apbt.online-pedigrees.com/modules.php?name=Public&file=printPedigree&dog_id=129275